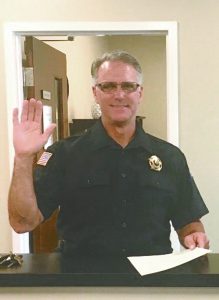 Submitted Photo
Police Chief Rea was hired at the City Council’s special meeting held June 15, 2020; it was a unanimous vote by the members. He began his chief tenure after being sworn into the position on July 1.

By Tony Hooker
After retiring from the Champaign PD after a long, successful career, Bob Rea thought that he was ready to seek other challenges in other lines of work.

Turns out that Rea missed the day to day life of a police officer more than he imagined.  Turns out that Rea, the newly named Villa Grove Chief of Police, has a desire to share his experiences in police work in Champaign with the force here in VG.  Rea and I recently discussed his experiences and the strengths that he feels he’s bringing to the department.

What is the main strength that you bring to your role as Chief?

Do you have a good read on the strengths and weaknesses of your team?

Not yet. <laughs> I’ve not even been in uniform yet.  I’m still waiting on some equipment to come in before I can get out there and work with them, because that’s when I’ll start to get to know them.

Can you talk a little bit about your background?

I started off in Arcola in 1992.  I worked there for 2 1/2 years and then worked in Macon County for a short time and then I got hired by Champaign. I went to Champaign in 1995 and retired from there in November of 2016.  In Champaign, I spent seven years as a patrolman. I was a field training officer and also selected for the SWAT team.  I was promoted to detective and did that for three years.  I then got promoted to Sergeant and I was Patrol shift sergeant for about seven years and then I was promoted to Sergeant of investigations and I did that for about three months before I got promoted to Lieutenant of Investigations and then I was Patrol Lieutenant for two more years.  I was a SWAT team leader for about 5 years, and then I became the assistant commander, which was basically an administrative role.  I did a little bit of everything. I learned a lot.   I understand that there’s a big difference between Champaign and Villa Grove and that some people might be concerned that I’m bringing Champaign policing to this town, and I guess I am, to a certain extent, because that’s twenty-one years of experience.  I learned a lot, but I grew up in a small town, I got started in police work in a small town, and I can be a small-town officer and do it effectively.

What’s the biggest difference between small town police work and in a bigger city?

Here, you know most people, or at least you know of them, and in a place like Champaign that there are so many people who come into your district that don’t live there.  They come in and they cause trouble and they go out.  I think it’s more personal here in a small town.  It’s a friendlier relationship because you’re acquainted with the people who aren’t problems, you’re acquainted with the residents.   We’ll still get the same sorts of calls, but just a lot less frequently.  Here in Villa Grove, you might get one domestic call in a week, whereas in Champaign, we might have two, three or five of those in one shift.

Do you think that part of your role as Chief is to get out and be a part of the community, going to meetings, eating fried chicken and being visible?

I love chicken! <laughs> Yes, I think that going to those meetings is how I’ll get to know people’s names and get to know them.  People can share information with me, and I can share it with them.  People need to know me, and I need to know them. I need to get to know them so that I can learn what they expect from their police department.  I lived here before for 10 years, and I was active with my kids, I helped with baseball and basketball and I was on the JFL board.  I was active in my church, so I plan on being active in Villa Grove.

What’s the biggest change in Law enforcement that you’ve seen during your career?

Technology, without a doubt.  There are cameras in the cars, body cameras, computers for everything. When I first started in Champaign, you would get a memo once or twice per week in your mailbox.  When I left Champaign, I was getting an email every five minutes.  The amount of information that we share and that we’re expected to know has grown tremendously and it can be overwhelming at times.

<pauses> It’s good and bad, I think it’s a bit of information overload, and there’s also the expense of it.  Everyone will have cameras in their squad cars and cameras on their person, so that’s an added expense.  Plus you have to have servers to back up the data that you have from the car and from the body cameras, so that’s an additional expense up front and you have to pay maintenance fees annually to take care of the equipment.

Has there been an upsurge in juvenile crime? It seems like the bad guys are getting younger and younger.

Yes, I think so.  I don’t know what the numbers are in Villa Grove, firsthand, but from my experiences in Champaign, the offenders are getting younger and more violent.  You have fifteen and sixteen year old’s, shooting each other, and I don’t want that here.  I don’t want that anywhere.

Do you think that an SRO can serve as some sort of intervention, here, so that juveniles can see that police officers are humans and not bad ones?

I know it’s really too early in your tenure for you to have an answer to this, but is there anything that you’ve seen in your first few days on the job that you know you want to change?

Within the department, there are several things, technology-wise that need updating.  Radios, cameras, records management systems.  Those are all things that are going to be on my priority list this first year, especially the radios, because that’s an officer safety issue.  Cameras are important for evidence collection and also to prove that the officer didn’t do anything wrong if falsely accused.

Any other glaring things that you’re going to want to improve down the road?

Really just a little bit of everything.   Dennis (Chief Gire) was here for a long time and had his way of doing things, and now you’ve got a new guy coming in and I’m going to want to do things in a way that I’m comfortable with and work best for the guys and are most efficient for the department.

What’s the best thing about being a police officer?

I chose law enforcement because I wanted a career that was productive, one that contributed in some way, you know.  Before I became a police officer, I did factory work and I worked construction.  I didn’t have any kind of passion for it.  If you have a passion for it, you’re probably going to be pretty good at it.  If you like writing and interviewing, you’re probably going to be good at it.  I like police work and I’m determined to be successful here.

The worst part is the worst people.  People do evil, terrible things to each other, and the worst of the worst are just terrible, disrespectful people.  They have issues in behavior, attitude, thinking.  It seems to be a little bit of everything.  You can’t let it bother you.  I’ve always tried to be respectful.  There’s no sense getting into a debate, because you’re not going to change your mind.  Everyone disrespects you when you’re coming there to arrest them, they’re not very happy.  We’re just there to solve a problem, and sometimes that problem is solved by people going to jail.

How long do you see yourself continuing in this role?

As long as I’m physically able to do it.

As long as it keeps your mind engaged, right?

In my last job, that’s one of the things I missed.  I missed the problem solving, the having responsibility of doing things, if you know what I mean.

There’s also a certain camaraderie that is missing from other types of work, isn’t there?

That was the worst thing about retiring from Champaign.  I had a good, close group of friends that I saw five or six days a week, until one day, Boom, it was just gone.  Now you’re texting those guys occasionally when you used to be talking to them all the time about planning weekends.  “Let’s tailgate this weekend,”.  I miss that sort of stuff.

I’d like to say thank you.  I think they (citizens) can trust me.  I think that they can have confidence in the kind of job I’m going to do here.  I don’t think they need to be afraid that I’m going to come in with this heavy hand and start taking everyone to jail.  I plan on being a small-town chief of police, and my goal is to fit in.