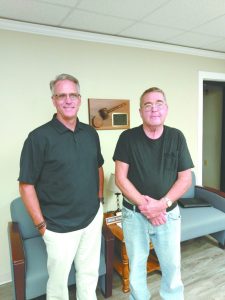 The Villa Grove city council met on June 22, for their Committee of the Whole, non-voting monthly meeting, and roll was called, with all aldermen, Mayor Eversole Gunter, Administrator Athey and Clerk Osborne present.  Also in attendance were retiring chief Gire and newly appointed Chief Rae, along with public works director Arbuckle.

After the Pledge of Allegiance, the meeting began as noted on the agenda.

Arbuckle reported that he had met with city Engineer Andy Kieser to discuss the McCoy subdivision water project, and that it looked to be on track to be let for bids.  It was also noted that the IEPA loan to complete both the McCoy project and water plant demo was on track, and that it contained language that included a 50 percent forgiveness.  Arbuckle then reported that he was waiting on Paul’s Machine administrators to sign the easement agreement so that the Rt 130 Crosswalk project could be completed.   He also noted that he would be discussing the water plant air scrubber deficiencies with Fehr Graham, as well.  Finally, he asked the council to give the go ahead on pouring concrete sidewalk replacements.  He was confident that Public Works staff could finish the project without outside assistance.

Administrator Athey reported that a representative of the Audit team had spent the day in the city offices and that the audit itself was set to begin as planned.

After receiving a complaint from Becky Russell, one of his constituents, Alderman Hooker wanted to remind the citizens of Villa Grove that it was their responsibility to clean up after their pets when on others’ property.

Mayor Eversole Gunter reported no new issues to be brought before the council.

1. Mayor Eversole Gunter presented a plaque honoring Dennis Gire’s three decades of service to the community and noted that there would be an open house honoring the chief at a later date.

2. A scheduled review of budgets and balances to look at a potential sewer rate increase was tabled for a future date, and Administrator Athey would put together the numbers.

The counsel then went to a closed session to discuss personnel matters at 6:32 p.m. and coming out of the closed session and finding no other items on the agenda, Alderman Hooker motioned to adjourn at 7:06 p.m.