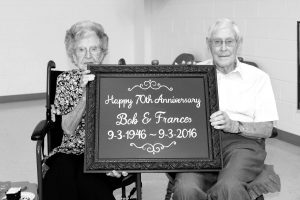 A family graveside service with military rites conducted by the Walter Jones VFW Post 2876 of Villa Grove was held at 10:30 a.m. on Saturday, June 20, 2020 in the Arcola Cemetery. The Rev. Ted Shearer officiated. The Edwards Funeral Home is assisting with arrangements.

He was preceded in death by his parents; one brother, Mervin Wells; and four sisters, Florence Waggle, Flossie Ray, Goldie Lucille Wells and Fern Beatrice Chapman.

Mr. Wells graduated from Villa Grove High School in 1941 and entered service in the U.S. Army in January 1943. He served three years and four months in the 426th Armored Field Artillery in the AsiaticPacific Theater in World War II, and then served six months in the Korea Conflict at Camp McCoy in Wisconsin.

He retired from USI chemical plant in Tuscola in 1985 with 32 years as a pipefitter. After the war, he moved to Hindsboro and was a Hindsboro Village Board trustee for years. After moving back to Camargo in 1987, he was on the Camargo Zoning Board.

He enjoyed camping, fishing, woodworking and he loved to do landscaping around his yard.

He was a member of the Camargo United Methodist Church and the Villa Grove VFW.

Memorials may be made to St. Jude Children’s Research Hospital.