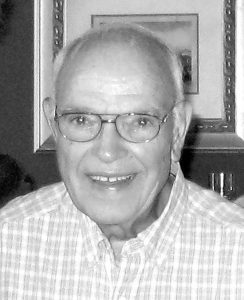 Raymond Ziegmont Kroswek, 88, passed away on March 19, 2020 with family by his side at the VA hospital in Ann Arbor, Michigan.

“Ray” grew up in Unionville, MI and graduated from Unionville High School in 1948. He enlisted in the Navy during the Korean War, 1951 to 1955, serving on the aircraft carrier USS Bon Homme Richard in the BC33 squadron. He graduated from Central Michigan University with a Bachelor’s in Education in 1958. He began his teaching and coaching career in Kinde, MI then moved on to Akron-Fairgrove.  He then worked for General Motors starting at Chevrolet Bay City in 1965 and transferred to Chevrolet Adrian in 1981, as a materials manager, retiring in 1993.

He married his wife of 57 years, Michaela Carmody, on June 6, 1959 at St. Joseph Catholic Church in Unionville. Raymond, the eternal optimist, was a very outgoing friendly man and was devoted to his faith and family. He was an active member of St. Mary on the Lake Catholic Church in Manitou Beach, MI volunteering as a lay minister, usher and in other activities. Ray enjoyed gardening, sports, travel, boating, and golf but the most important part of his life was his love of his wife, family and friends. He welcomed people to his home on Round Lake in Manitou Beach, MI and wintered in New Smyrna Beach, FL.

He was preceded in death by his wife Michaela, his parents and siblings, Franklin, Margaret and Richard.

A funeral service was held at St. Mary on the Lake on Saturday, July 25, 2020 at 11:00 a.m., with Fr. Todd Koenigsknecht presiding.  The church has limited capacity, however, the mass will be live-streamed (see Diocese of Lansing website).  A final burial in Unionville will be held at a later date.

Donations may be sent to St. Mary on the Lake, the VA Ann Arbor or Hospice of Lenawee.