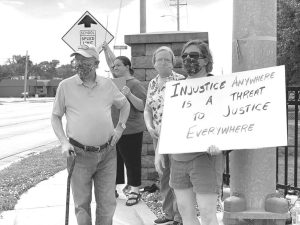 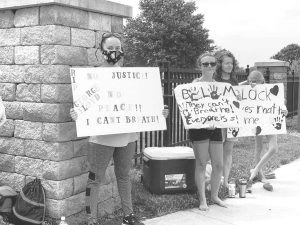 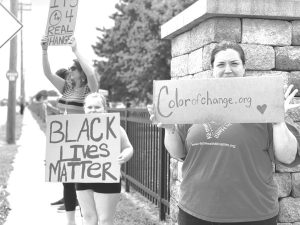 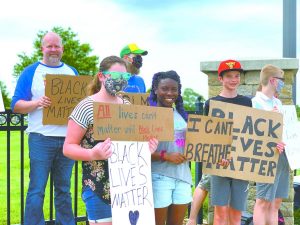 Photos: Patty Maryniak
Peaceful protesters gathered on the corner of US Route 36 and Prairie Street on June 5 to bring attention to the Black Lives Matter movement.

By Kendra Hennis
Following nationwide protests of police brutality in the Black community responding the death of George Floyd, Tuscola residents have brought the peaceful protest to the corner of Prairie and Route 36. What began with one man alone on a corner turned into a group of thirty in less than a week. Protesters ranged from all ages and demographics, with some even traveling to be a part of the cause. I had the opportunity to stop by and ask some questions and this is what they had to say.

Les Evans, Senior Minister at the First Christan Church, said, “I am protesting because it is way past due for me to stand in the gap so the people of color in this world know where I stand as a White Christian leader. As a Christian minister our congregants who are Black or Brown need to know if their preacher is with them or not. Especially in a small White town. They will know I am with them with my voice and with my actions. My son is Japanese and one of my daughters is Black. I want their world to be different than the one we are in. We can be, and do, better. I also want to stop disappointing my friends of color by remaining silent and complacent. The Black people in our circles need to hear us say the words “Black Lives Matter” without correction or addition. Our incessant need to get one more word in is because we love to control the narrative in White America. It’s like the spoiled kid who tries to have the last word with mom and keeps talking over her. We need to say black lives matter and then stop from whatever else we were about to say next. Just say the words, communicate the idea, demonstrate that you believe Black lives actually do matter so people will know they are loved.”

Marnie Leonard, 2014 Graduate of TCHS and former Gender and Education Specialist at the United States Peace Corps, said that they decided to bring the protest to Tuscola because, “We want to start a dialogue about racism and white privilege in Tuscola. When protests after George Floyd’s death started happening all across the country, it seemed like the conversations being had everywhere else — about Black Lives Matter, police brutality, racism and white privilege — were not being had in Tuscola. Tuscola is a predominately white town and as white people we really need to reckon with our own complicity in systemic racism. We tend to be really undereducated when it comes to the racist past in the US and how our racist past has created a racist present. I include myself in that because I am still learning every day, but that’s what we’re asking of people — be active and intentional about educating yourself to become truly anti-racist. We are posting resources for folks to self-educate in our new Facebook group, Tuscolians for Racial Justice, so head there if you aren’t sure where to start.”

The peaceful protests have been mostly organized by the youth and young people in Tuscola. Cathy Mannen said that, “Young people have done this work: youth who live in our community and young adults who live in or are from our community have done the organizing. It’s important to highlight that this started with one person who had something to say and stood up publicly and said it. That had to take an incredible amount of courage. And then someone else saw him, supported what he had to say, and joined him. And it slowly grew from there. I think this is a good example of how one person can effect change.”

Mannen says it is important for people to support the cause because, “Racism is pervasive across our country. There is no community immune from it, including ours. We need to start having community conversations about race, racism, and how to be anti-racist. These are hard, uncomfortable conversations. But we have to be willing to sit in our discomfort, listen to understand, reflect on why we are uncomfortable, and what we can do about it. I am by no means an expert. I understand racism differently now than I did even just four years ago. I understand it differently because I’ve worked at it. I’ve taken the opportunity to look at our country’s history more critically from the perspective of people of color. Their historical experiences are different from the historical experiences of White people and have been for 400 years. History is often told from the White perspective. We conveniently leave out or minimize the historical and ongoing harm that has been done to people of color because of policies, practices, systemic structures, and institutions.”

TCHS Junior Alyssa Williams said it was important for her to stand up for the cause because “In a town like Tuscola where diversity is lacking, I think racism is overlooked and many community members won’t even acknowledge its presence here.  I always will stand out in this town so I might as well send a good message while I have their attention.”

The group said that the community reactions have been mostly positive, with many honking, waving, and giving thumbs up. Leonard joked that on Tuesday they had more water than they knew what to do with. Mannen said, “I think there are a lot of people in Tuscola who recognize the injustices and inequities that are both historical and ongoing. And I also think that for a lot of people, while they recognize it, they may not know what to do about it and feel powerless. Standing together on the corner of Route 36 and Prairie and publicly lifting our collective voice to speak against racism and violence against Black people is empowering. Other ways we were supported included people dropping off bottled water to help demonstrators stay hydrated, along with popsicles and ice cream treats. We did, however, receive some profane and vulgar comments from people driving by. And, yes, some of those comments were made by people who live in our community. The fact that they were willing to say those things to young people in our community should outrage all of us. We have some strong youth leadership in Tuscola. They have a lot to say and we need to be listening to them. They will notice who stands with them and who stays on the sidelines.”

Leonard says it is important for others to support the cause because “Black Lives Matter and all lives matter are not opposing viewpoints. No one is saying that all lives don’t matter, we’re simply advocating for Black lives because Black lives are disproportionately endangered due to the racist systems we have in place, and undoing racist systems starts with yourself. We should all be doing everything in our power to actively combat racism, including donating to funds that support communities of color if you’re able, demonstrating/protesting if you’re able, engaging in productive coversations with family and friends, and educating yourself on how to be anti-racist. We have resources on how to begin doing these things on our Facebook page, Tuscolians for Racial Justice.”

The group has another protest scheduled for Sunday, June 14 from 4 to 6 p.m. You can also get in contact with them on their Facebook page.

Editor’s Note: The comments of Cathy Mannen’s are her own and are not on behalf of the Tuscola school board.