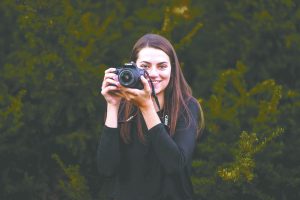 By Tony Hooker
Grace Hutchison has never worked at a newspaper, radio or TV station.

That doesn’t, however, mean that she’s not an award-winning journalist.

You see, Hutchison, a 2020 VGHS grad, was one of 12 students state-wide to be named to the Illinois Journalism Education Association All-State team.  I recently caught up with the future MD, to talk about the award, her pandemic shortened senior year and much, much more.

You recently won an award for journalism.  Can you tell me about the award, what led you to apply for it, and what you had to do to bring it home?

It’s the Illinois Journalism Education Association All-State team, there were 12 recipients state-wide.  I was introduced to it through our yearbook advisor, Mr. Cordes.  He is driven and inspired to make sure that we students get the recognition that we deserve.  IJEA also sponsors some competitions for our yearbook, and we’ve gotten a couple of awards.  Last year we got honorable mention for both journalism and photography.  I think the year before, we got second in both.  He’s always been wanting one of his to try this, so I finally decided that I could do it.  Back at the very beginning of the lockdown, I believe March 30 was the deadline, Mr. Cordes and I got together and to apply, he had to write a letter of recommendation and I had to submit some of my work and talk about what I submitted and why I submitted it. It was a pretty extensive process.  It took a few hours to complete. We found out earlier this month that I was selected.  There is usually a banquet where all the recipients are recognized together, but this year it will be done by Zoom.

Great, so you can eat a peanut butter sandwich instead of a feast?

<Laughing> Exactly, I was like “Mom, are you going to fix me a banquet meal?”

Is there a monetary award that comes with this all-state designation?

Not that I’m aware of.

What drove your interest in photography?

I was in advanced math, so in sixth grade, I was in seventh grade math, and Mr. Cordes was my teacher.  During homecoming week, he would send myself and Sydney Eisenmenger out to take pictures.  I guess that my photography skills were good enough that we just kind of continued to do that.  When I got into high school, I knew that yearbook was one of the clubs that I wanted to be involved in, so I basically just ran up the leadership ladder in that organization.

So you’re going to be a future Doctor, a future surgeon instead of following a career as a journalist?

Not as a profession.   I’ve started writing a bit in my free time, because I have a ton of it now and I’m trying to come up with some new hobbies.  I think I might pursue it as a passion project here or there, but nothing professionally.

Let’s talk a bit about scholastic bowl.  The season obviously didn’t turn out how any of us would have wanted, but now you’re telling me the season isn’t over?

Last year when we competed at nationals, we were named small school national champion, and with that title came a bid to this year’s competition.  The competition was to take place in Virginia, but their stay at home order is, I believe, until June 7.   We were unable to be there in person, so they’ve decided to move it to an online format.  They’re using Google meet and email to run this from our own homes.  All of our team is their home.  Our competition is in their home.  Our coaches are in their homes.  The moderator is who knows where?  <laughs> I was concerned because my internet isn’t the best, but they are allowing for repeating questions, which is something that does not usually happen.  There’s no buzzer system which is different.   Every team has a captain, and only the captains are allowed to give answers.  To give the answer, they have to say “answer” followed by whatever their answer is.

How do you communicate your answer to your captain?

During every single question, the team is allowed to communicate, which is not usually how it happens.  During the question, we communicate via chat, everyone can hear each other talking.  There’s also a chat feature where we can text our answers to our captain, as well.

Have you been honing your keyboarding skills so that you can rapidly communicate with your team captain?

I have not!  When we played our practice round, half of us were team A and half were team B, and we just talked.  It worked out pretty nicely.  There’s a caption feature that works pretty well.  We haven’t used the texting feature, so I’m not sure how that will work out.

You were telling me earlier that the opponents can also hear your chat?

Yes.  Everyone is in the same google meets, everyone can hear everything that is said, everyone can see what you’re writing.  If you’re shouting out answers the other team can easily steal them.

What are you doing this summer?

This summer, I’ll be working at the Villa Grove State Bank and babysitting.

You’re not taking any classes, working ahead a little bit?

I’ve thought about taking a biology class because I haven’t taken one in a long time.  With the hands on, lab stuff and being switched to an online format, I’m just not too sure.

You’ll be attending Bradley University in the fall.  How did you come to that decision?

My mom was actually the one that turned me on to it.  She works at OSF and OSF has partnered with them on projects.  She turned me on to them, and then I just did some more research and I found that they have a very good pre-med program, and they’re very committed to making sure that their students have hands-on experiences.  Something that I thought was fascinating was that they require you to have two experiences outside the classroom in whatever your academic area is.  Whenever I’ve visited, it seems like the staff is just so committed to seeing all their students do well.

What med school are you looking at down the road?

I would love to go to Johns Hopkins. It’s kind of a stretch, it’s in Baltimore, MD.  It’s so fascinating, and they’re such a world-renowned college that I would love to attend.  I’ve looked there, and I’ve looked at Vanderbilt in Nashville.

This is kind of a dumb question, but how was virtual commencement?  Did it in any way give you a sense of fulfillment?

It did give me a little bit of closure to walk across the stage.  It’s definitely not as fulfilling, as graduating with my class would have been.  I’m writing a welcome speech right now, because I’m the president of our class, and I’m struggling with that because in normal circumstances, I’d be saying “welcome to Villa Grove High School, and now I’m saying welcome…to your own home, watching a video of us graduating! <laughs>