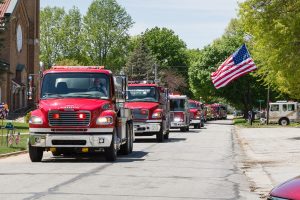 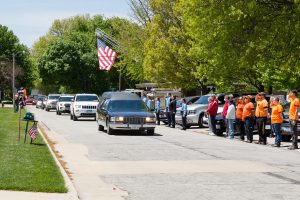 By Kendra Hennis
Over his 40 years working for Douglas County, Joe Victor helped people in as many ways as he could. Serving in his time as an ambulance operator, deputy sheriff, firefighter, disaster responder, and county coroner, Victor truly made an impact on so many lives around him.

Joe’s life of service began in 1973 when he was the owner and operator of Ace Ambulance Service in Tuscola until 1996. He was also working as a Douglas County Deputy Sheriff from 1980 to 1994. Victor then served as the Douglas County Coroner from 1994 until his death on May 5. Outside of his life in the public eye, Joe and his wife, LuAnn, raised two daughters, Erin and Carrie.

One of the people who knew Joe best, Chana Ray, Deputy Director of the Douglas County EMA, had this to say about Joe, “Joe Victor was a boss, a mentor, a friend, and finally, family.  He took me under his wings.  He shaped me and guided me and made me his Deputy Director of EMA. He taught me and showed me compassion. He was family, my kids grew up around him; he shared courage and compassion with them. He was always there to lend an ear, day or night for all of us. His compassion is what made him a great EMA director and coroner.  Joe not only shared his compassion with us, but also his communities. He was there during tornadoes, floods, and many other disasters. Joe was also known across the State of Illinois; he would work with the IESMA/EMAT team and answer the call wherever he may be needed.  My family knew him as Mr. Joe, he was family. He used to tell me,. “I wish it would snow”,  “It’s cold enough to”,  I would go out to run errands and ask him if he needed anything, “Yea, a pound of 50’s.  Joe would say, ”you’re fishing all wrong with a fishing pole, throw an M80”,  “That’s how I like to fish”.  Joe will live on in our memories, our office, and our hearts.  Never to be forgotten, I know. He will always have our 6 (our backs) guiding us and watching over us. And he will never be forgotten.”

Former Douglas County Sheriff Charlie McGrew said that, “Joe Victor was a true public servant. He served as a Police Officer, owned an ambulance service, a Deputy Coroner and the Douglas County Coroner.  He never left his chosen field. He stayed for low pay, bad working hours and little acknowledgement.  That is true commitment. Not many people do that.”

Along with his other roles, Joe served as a firefighter for 15 years and was a member and past District Director of the Illinois Coroners and Medical Examiners Association. He also served as the Director for the Douglas County Emergency Management Agency, was a past President of the Illinois Emergency Services Management Association, served on the EMAT team, and created the Douglas County Search and Rescue team.

Tuscola Mayor Dan Kleiss, when asked about Joe, said, “I had the pleasure to work with Joe at the City level and also while I was employed by Cabot Corporation. Joe was always easy and a pleasure to work with.  He was always the first to say, “whatever you need all you have to do is give me a call and I will get it for you.”  He especially was quick to help out the local industries in any of their training needs as it related to emergency preparedness and very willing to supply needed equipment.  He had a kind heart and as I said always willing to help in any way he could regardless of the time of day.  Joe was just there whenever you needed him.  He was truly your partner when you were in an emergency situation. Joe will be dearly missed by Douglas county and probably even beyond that.  He served his community well and my thoughts and prayers are with LuAnn and family.”

Nathan Burton, Newman Police Chief, said, ” There are so many wonderful things that can be said about Joe Victor. In reality the list is endless. Joe touched so many people, in so many ways, over his 65 years of life. Whether it was a quick phone call to see how you were doing or the way he compassionately delivered a death notification, Joe always knew the right thing to say at the right time. I have several fond memories of Joe Victor, but one stood out to me while preparing for this article. In 2017, while shooting my .45 cal duty weapon on the training range, I caught some blow back (tiny pieces of the projectile) to my face after shooting a steel target. I immediately felt the warm blood trickle down my face so I went to the restroom to assess the damage. Prior to wiping away any of the blood, I did what any attention seeker would have done. I took a selfie and posted my war scar on Facebook. At approximately 5 p.m. on the same date I received a call from Joe while driving home from the U of I range. After saying hello, Joe simply asked me if it hurt. Naturally I laughed and replied “nah I’m tough”, but in reality it hurt like the dickens. Joe then simply said “I’m glad you’re okay kid, things could always have been worse”.

That simple phone call, telling me that things could always have been worse,sticks with me to this day. Joe always knew that so many people in this world experience so much worse than what you and I do. This part of Joe’s mindset restricted him from complaining about his own physical pain. He was such a benevolent human being, always putting others before himself. Joe will be sadly missed. May God grant peace upon Joe’s loved ones as they grieve the loss of their loving husband, father and friend.”

Dozens of area emergency services, law enforcement, fire department and other public agencies gathered to honor Joe Victor by participating in a funeral procession which passed by his final resting place in the Tuscola Cemetery. The sidewalks in Tuscola were lined (in social-distancing guidelines) with people to pay their respects to Victor on their way to the burial. Joe was laid to rest on May 9 in a private family burial in the Tuscola cemetery. His family hopes to hold a celebration of life once it is safe to do so.