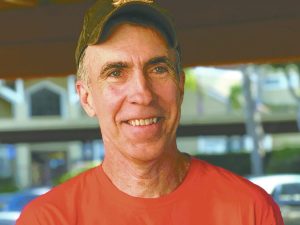 By Kendra Hennis
The Tri-County Journal is lucky to have a new addition in next week’s edition. Former Tuscolian Dick Gallagher, author of A Bo James Story, will be including his short story in our newspaper. Here is some information about Gallagher and his story in anticipation for next week.

You mentioned growing up in Tuscola, did you graduate from TCHS? If yes, what year?

What did you do after leaving Tuscola?

I headed to the University of Illinois and graduated with a degree in Accountancy in 1982.  The thought of seeing a different part of the country came to me via an invitation from a college friend who was living in Greeley, Colorado, so I headed west and spent the next 34 years in various accounting and auditing positions.

What inspired you to write this book?

The idea for the book came after I completed reading a James Bond novel, and I was laughing about how that character was impossibly good at everything.  I thought it would be fun to create a more down-to-earth such hero, also good at everything, but in a small town kind of way.  I wrote the first chapter the night I finished the Bond novel, using that character as the inspiration for my hero’s name.

Like a lot of folks, the older I get, the more nostalgic I become, and so I used memories of Tuscola and various businesses of Tuscola in the story.  Some of the street names come from some of my former teachers, and I must give a tip of the hat to Floriene Barber, my seventh grade homeroom teacher, who encouraged creative writing and who seemed to like my sense of humor.  And of course, my love for classic cars shows up in A Bo James Story, and in Bo James Returns.

Do you have anything you would like added for the readers of the Journal and Tri-County?

Things readers might get a kick out of in the story are the poorly disguised references to musicians, TV shows, movies, and books that were part of my life in the 1960’s and 1970’s and beyond.  The names of several of the characters were borrowed from classmates, but any character flaws are purely of my own invention.  I look back now with much respect and appreciation for all the people who helped to shape my youth, and I am very thankful to have grown up in the small town of Tuscola at a time when neighborhood kids and dogs could roam free, and some of the best times were spent chatting with neighbors on front porches before wandering home to supper.