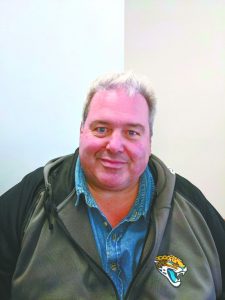 By Tony Hooker
David A. Albin, the President and Chairman of the Board of the Longview Capital Corporation, knows a thing or two about agriculture.

After all, the 1981 University of Illinois graduate grew up on a farm Southwest of Newman, where his family ran a diversified Ag operation.

“We had hogs, growing up,” Albin said, in addition to corn and beans.  “We had cattle also,” he added. “And we had sheep.  In fact, my dad was the president of the Shropshire Sheep association when I was growing up.”

Albin’s operation today still has 10-15 head of Hereford cattle, most years.  “When my son was in school, we probably had 100 head,” he added.  Today, the farm’s main production centers around corn and Soybeans.  “We raise mostly food grade corn for Frito-Lay and Stine seed beans,” Albin stated.

So, when one of the area’s Ag leaders tries something new in the world of farming, people take notice.

And that was the case last growing season when Albin and other area producers tried their hand at industrial hemp production.

“We tried about half an acre,” Albin said.  “I would rate it a learning failure,” Albin quipped when asked about his initial foray into the project.  “Several of us went into this together, and we got three or four different varieties of seed, and the one I received really wasn’t a good variety.  I think weeds were more prevalent than hemp,” he added.

Hemp has to have a good, solid stand in order to withstand pressure from invasive plants, and proper planting is imperative. “We were neophytes and really didn’t know where or how to plant it,” Albin noted.  “We just didn’t get a good stand. It is very sensitive.”

As noted, Albin learned from his first attempt. So much so, in fact, that he is definitely interested in making another attempt, albeit with some modifications.  “We’re seriously considering the plants that produce CBD oil this year,” Albin said.  Unlike Industrial Hemp, which is drilled as a general rule, the plants that produce CBD oil are planted in rows, like corn.  Because weeds are the main nemesis and there aren’t herbicides to be used, plastic is often placed between the rows, which is a very labor-intensive process.  “I was on Facebook and saw an ad for someone who will come and plant it for you,” Albin stated.  He also noted that a farmer near Carmi, Illinois had planted using this method during the previous growing season.

Why the interest in Industrial Hemp?  According to Albin, basically every product that is made from a tree can be made from hemp, and it is much more renewable than lumber, making it a much more environmentally friendly product.  Hemp can be mixed with plastic to make a biodegradable product, as well. “BMW and John Deere use products made with hemp,” Albin noted.  “There’s even a plant in Kentucky that is using hemp to make boards & lumber.”

One common misconception that Albin wanted to clarify is the difference between Industrial Hemp and Marijuana.  “Marijuana contains the intoxicating agent tetrahydrocannabinol, while Industrial Hemp cannot contain more than .03 percent THC.  “Our product is tested as soon as we begin the harvest,” Albin noted, “and if it contains more that .03 percent, the entire field must be eradicated.”

Even with so much going for it, including an opportunity to make significantly more per acre than traditional crops in addition to the aforementioned renewability and environmental advantages, there are still significant barriers to it becoming an option for area farmers.  China and other Asian markets have a significant hold on the current market, but according to Albin, the biggest barrier is more regional in nature.  “We need to get more processing plants in the region,” Albin said.  “There just aren’t enough to handle what could take place.”

As for the future of Industrial Hemp and CBD Oil production, Albin remains optimistic.  “It could become a real catalyst if we can get industries to invest.” Albin stated adamantly.  “Farmers are intelligent enough to figure out how to produce it and make it a viable third crop option.”