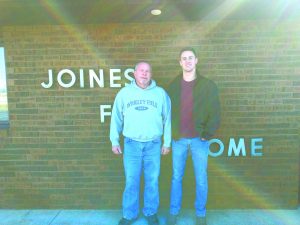 By Tony Hooker
After more than four decades in the business, Bob Faust, the director of Joines Funeral Home in Villa Grove, is ready see his role reduced.

Enter 2014 VGHS grad Jake Reifsteck, who is currently completing his internship at Joines, the final necessary step before completing a Bachelor’s degree in Mortuary Science and Funeral Service from SIU-Carbondale.

I recently sat down with the two VG residents to discuss their careers, the transition process, and much more.

Bob, how long have you been a funeral home director?

The million-dollar question that everyone’s talking about at the coffee shop is how much longer are you going to continue?

We’ll stick around until Jake gets his license and we get him fully established. We need to get him where he knows people and that sort of thing.

I have to ask, because everyone always wants to know, how did you come to be a funeral home director?

<Laughing> That’s a good question!  The people I grew up with always ask me “Do you do that?”   In all reality, I married the boss’s daughter.  We got married very young and she went to college and I went to work at the coal mine.  When she got out, she got a job right away, so we had to decide whether we wanted two incomes or if I should go to school.  Back then, I was in the lottery draft so I figured I would go to college.  To make a long story short, I went to Eastern.  I was 25 years old and I went out for football.  I wanted to teach and coach.  While I was there, my father in law was having trouble finding help, so I decided to transfer out and get my mortuary science degree and come back and help him.  While I was in mortuary school, he decided to build this facility in Villa Grove, and the rest is history!

How about you, Jake?

I went to Parkland, studying Criminal Justice, and I had to take a Forensic Science class.  That got me interested in death and what happens after death.  My second year, halfway through is when I really decided that I wanted to do Mortuary Science. After that, I started taking more science classes and officially changed my major to Mortuary Science and Funeral Service.  I stayed there for an extra year to take more science classes and then transferred to Carbondale, and that was about it.

What’s the next step for you?

I’m in my apprenticeship now, and in July I’ll finish up.  I’m not sure when I’ll get my official license, probably sometime in August.

Is there an official certification test?

I’ve already taken that. I wanted to take it right away while everything was still in my head! <smiles> I’ve already passed both portions of that.

This apprenticing with a licensed funeral home director is the last step?

That’s the last step, and it’s what I’m doing now.

What has been the best part of the job for you, so far?

How about you, Bob?  What’s been the best part of your career?

Has the industry changed in 43 years?

Yes, in some respects.  The cremation rate is going up.  In this area, it’s not so much choice as it is economical.  That’s the biggest change I’ve seen.  We have to take so many hours of continuing education every year, and they don’t teach us anything new! <smiles>   They’re just trying to sell you something.  Our practices, our embalming, that sort of thing doesn’t change.

Are you going to hang around after July, when Jake says he’ll be getting his license?

I’ll hang around. I don’t think Jake’s quite ready to buy into everything yet.  When that time comes, I’ll be here helping him, but I want to give him the daily operation.  I’ll let him get the 3 a.m. phone calls.

Jake, are you ready for those?

Yeah, I’m ready for them.  I get them now, but I get them from Bob instead of the family!

The plan is for you to run operations for him.  I assume you’re going to take over the entire business.

Definitely, once we get to the point where I feel financially ready to tackle all of that, buying into a business.  I’ve been helping out over at Newman.

Bob, is your father in law still the director over at Newman?

<JR> People always tell me that I have the right sort of personality for the job.  I don’t get it, but they get it.

Is that a compliment?

How about you, Bob?  Would you add anything to that?

Not really.  I told Jake that he just has to be himself. Just be who you are, you’re helping the family the best that you can.  In a small town, you’ll know the people you’re going to be talking to.  I think that was one decision that Jake had to make. Stay small town, in your hometown, or move to a city and be an hourly employee instead of a 24/7 person who does everything.

Bob, you’ve been an involved member of the community for forty years.  What sort of strategies have you shared with Jake for dealing with the fact that you’re serving people that you know, your friends and their families?

Jake, is that something that you’ve had to face?  The fact that someday you’ll be having to serve the families of your friends and classmates?

Yes, we’ve talked about that, and it’s just like what Bob said earlier.  The best part and the worst part are knowing everyone.  I’ve said it before, but I’d rather know that the family and the deceased is being well taken care of by me instead of trusting someone else.  At the same time that it sucks to take care of something like that, at least you know that it will be done right, as respectfully as possible.

Jake, do you live here in Villa Grove?

Outside of Villa Grove.  We bought a house.

Your fiancé is from Hume?

Is there anything that I missed.

<BF> I don’t know what it would be.  I think Jake has made a wise choice.  He has the right temperament and personality and he does quality work.  There are just small nuances on a daily basis that we do that he has to learn.  He catches on to everything very quickly, and I’m feeling really, really comfortable about having that young man serve this community.

How about you, Jake?

It’s exactly like what he said.  It’s all the little detail work that takes a little while to catch on to.

<BF> I just want to become the new Footie. <all laugh> The one who helps the funeral director.