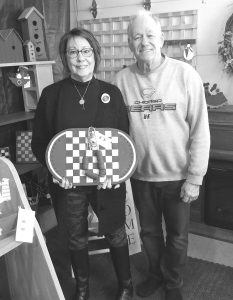 By Tony Hooker
Vikki Hemrich has held many roles in her career.  From restaurant manager at Monical’s to substitute English teacher to retail manager to her current job as owner agent of Bronze Key Realty.  She has even spent some time as one of us inked stained wretches, working at the Villa Grove News.

Husband David tells a different story however, going straight from high school to a forty-year career at Clifford Jacobs Forging.  Together, however, they’ve created Checkerboard Corner, a home-based business that designs and makes wood-based crafts and miniatures.  Located a couple of miles west of Villa Grove on Hayes Road, their shop is open on Saturdays and Sundays.  They recently took a few minutes to talk about their business, and a great many other things.

To me, many of your pieces look like works of art.  Where do you think the inspiration for your pieces comes from?

<VH> I saw the checkerboard in Country Sampler magazine, back in the eighties, I guess. We’re raising four kids, and I didn’t have $50 to spend, but it was so adorable.  I showed him the picture and asked if he could make a checkerboard for me.  He said, “Sure,” and he’s made checkerboards for me.  The oval ones that I finish like watermelons and then square ones.  I’d see different patterns and we’d put them on benches.  There were so many things that he was making me that I thought “Maybe we should start selling them,” and we dabbled in that for a while.  Checkerboards are how it started, and we live on a corner and so we thought it was a no brainer to call it Checkerboard Corner.

<DH> I did a few other things like that pie safe over there. (Points at a beautiful piece in their living room)

This is a part-time passion for you at this time.  Do you want to talk about your “real” job?

<VH> Yes! <laughs> My real job is real estate.  In 2009, the bottom of the worst market in history, I got my real estate license, which was kind of crazy.  I got into it slowly, a step at a time, and thought if I didn’t like it I wouldn’t keep doing it.  I thought “I probably can’t pass the tests, anyway,” but I did so I got my license.  Then after a few years, every agent in Illinois had to take the broker license.  I went to work for Coldwell Banker, and I’d been doing real estate for big companies for ten years, and I thought “They take so much out of my paycheck, I want to try do it on my own.” I took the test for Managing Broker and passed and set up an LLC and found out Bronze Key was available with the state and called it Bronze Key Realty and I’ve been doing that on my own for a year now.

And you sir?  What is your real job?

<DH> I used to work at a forging steel company in Champaign called Clifford Jacobs.  I worked there for 47 years. I never had another job.  I retired at 65 and I was getting kind of bored, so I was kind of glad that she thought of this, too.  <VH> He’s my unpaid assistant! After four years of playing pool, I like to play a couple of nights a week in Champaign, and doing some golfing, this is a nice addition to retirement.

It probably takes a lot of thought, spatially and design-wise to lay a piece out, right?

<VH> I don’t ALWAYS do that! <smiling> It might have happened a couple of times.

Where do you get the inspiration for some of your other pieces?  Is it just from magazines or through looking out at your property?

<VH> I definitely know what I like. I’ll see a bench or something in a store and it’s so expensive and rickety, not sturdy and solid.  I’ll show it to Dave and ask if he can make it and he’ll say yes. He’s always said “Yeah, I can make that,” and then we figure out a design and he makes it.

<DH> I was lucky enough when we first started back in the nineties to build a workshop and insulated it well and bought all the tools.  They’d been sitting idle for quite a while and this gave me the incentive to get busy.  I felt bad with all those tools and I hadn’t been using them.  I’ve got heat out there so I can work during the day and it keeps me busy.

You have a nice garden and your yard is kept nicely with flowers and plants.  Is that your role, David?

<DH> Mostly I do the outside work, except for the designing part.  She likes to switch things up to look like spring or fall outside.  She tells me what to put up and take down.

<VH> He makes me sound so bossy!  Imagine that <both laugh>

How many hours a week do you put into Checkerboard Corner?

<VH> We’re open Saturdays and Sundays, we started in November, and we’re not seasonal.

<VH> Maybe a few hours during the week to make new things and oversee what’s out there.

You have it staged very beautifully.

How many hours a week do you spend in the production phase?

<DH> I would say it’s about the same.  About 10 hours a week.  Monday through Friday, I’ll go out there for 2 or 3 hours a day.  On Saturdays and Sundays, we try to stay pretty close in case someone comes in.

Did you grow up locally?

<DH> I grew up in Rantoul.  My father ran the grain elevator there for years.  I graduated from Rantoul high school in 1969.

How did you come to this location?

<VH> It was our family farm here in Villa Grove.  My dad, Charles Clementz, grew up in Villa Grove.  His dad, Pete Clementz, had an auto garage where the theater is on Main St.  Dad grew up on Walnut street.  We would come to visit grandma and grandpa all the time and I learned to drive the big Plymouth station wagon through the country from Tolono to Villa Grove.  That was fun! I loved it.   I’m a good driver.  Don’t say anything David!

<VH> My parents ended up building a house here when he was a junior in high school, so poor Chris got dragged from Unity for his senior year of high school.

In the early days, when I was living in Villa Grove, in the 70’s, I did some substitute teaching and managed a pizza parlor in Arcola for Sid Shanks.  I was in marketing at the outlet mall when they first opened, and I worked for 10 years at the Villa Grove News.  When you’re there, you do a little bit of everything.  I sold ads, wrote articles, took pictures, a little bit of everything and I loved it.