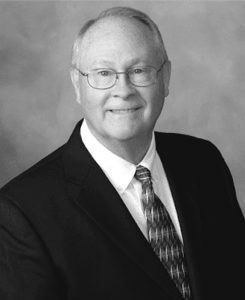 Darrell was a graduate of Bridgeport High School and attended Southern Illinois University in Carbondale, Illinois, graduating in 1969 with a degree in physical education and industrial arts. He married Flora P. Wallis in 1969 and moved to northern Illinois where Darrell taught industrial arts at the Sheridan School for Boys, physical education and industrial education at Valley View Boys School, and sixth grade at Alice Gustafson Elementary School in Batavia. In 1974 he began his forty-five year career as an agent for State Farm Insurance in DeKalb Illinois. In 1979 the couple welcomed their son Lee Frederick and in 1981 Jeffrey Wallis. He is remembered by his family as a devoted husband who placed his family first, a father who always made time and energy for his sons’ sports, activities, and passions and was deeply proud of them.

Darrell was well known as a community pillar who brought a smile to the face of everyone he interacted with and could always be counted on for his liberal use of puns. In his forty-five year career with State Farm he won dozens of awards for excellence in service and achievement which included qualifying thirteen times for the Legion of Honor. He liked to say he “didn’t sell insurance, he taught it.” He was a twelve time recipient of the Daily Chronicle Readers’ Choice Award for Best Insurance Agent and showed he was not just “Like” a good neighbor, he was one. To his clients, friends, family and the community he was beloved as “Uncle Darrell” who always had a smile, joke, and kind word. He was a former Lions Club and Voluntary Action Center Board President as well as a member of numerous community service boards.  He enjoyed travel, fishing, boating, spending time with family and friends and was an active member of the First Congregational Church choir.

He is survived by his wife, Flora; his sons, Lee (Chloe) of Los Angeles, and Jeffrey of Dallas; his favorite (and only) sister, Jan (Randy) Vogt; brother-in-law, Bill (Leslie) Wallis; sisters-in-law, Barbara Moore and Kay Wallis (Dick Miller); his aunt, Della Mae; he was beloved by many nieces, nephews, and cousins.

He was preceded in death by his parents, Donald and Norma; his grandparents; his brothers, Josephus and Donald Aaron; and his uncle, Willis Frahm.

The Funeral Service was held at 10:00 a.m. on Monday, February 24, 2020, at the First Congregational United Church of Christ, 615 N 1st Street , DeKalb, with the Rev. Joe Gastiger officiating. Burial followed at a later date at Oakwood Cemetery in DeKalb.

In lieu of flowers, memorials can be made to the Darrell F. Foss Memorial Fund, addressed to the Foss Family in care of Anderson Funeral Home, P.O. Box 605, 2011 South Fourth Street, DeKalb, IL 60115.

For information, visit www.AndersonFuneralHomeLtd.com or call 815-756-1022.