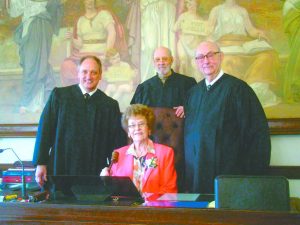 By Doris Elmore
Nellie B. Gilpin is a true icon at the Douglas County Court House. Since December, 1968 Nellie has been making the trek from Newman to the court house for her job as Court Reporter. It is approximately 17 miles one way from Newman to Tuscola and that is over 50 years doing a job she has loved from the beginning. On January 1, 2020 she decided it was now time to retire. However, since there is a shortage of Court Reporters Nellie stayed on the job waiting for a replacement to step in to take over the reins. This hasn’t happened at the present time, but February 21 was her final day. Temporary replacements will come from Decatur or Champaign.

Nellie recently celebrated her 85th birthday and still acts like she is in her 50’s. She is always dressed as though she just stepped out of a fashion magazine. She has a smile that won’t quit and an infectious laugh, but takes her job very seriously.

Nellie and her husband Bob are both graduates of Atwood-Hammond High School with the class of 1953. She took Gregg shorthand in school and following graduation took a job as secretary for a lawyer for five years. Nellie then took a hiatus from working to have her two sons, Gary and Brent. When the boys started to school, she decided it was time to return to work and agreed to taking the job as a court reporter.

With no formal education, Nellie received her education by doing her job to the best of her ability. She must have done a tremendous job because she has continued it for all these years. She has never looked back with regrets. She has enjoyed working with the judges and attorneys. She says there aren’t any nicer people to work with.

To this day Nellie uses her shorthand skills and a typewriter to transcribe her notes which she does at home because the job doesn’t allow time to do them at work. Over the years she has spent more hours than she can count transcribing her notes until the wee hours of the morning. Court is held every day and you go from one case to another with up to 10 cases or more in a day. On Public Defenders day there can be up to 25. Misdemeanors are in the morning and felonies in the afternoon. She says it makes for one long day for everyone.

When asked why she continued to use shorthand and not move up to a machine when they became available, she answered that she would have had to travel to Shelbyville for the schooling and that was just too far. Besides she added that the school closed 10 years ago. Nellie added that shorthand is a lost art and hasn’t been taught for 25 years.

“You don’t have to have a college degree to be a court reporter, just State Certified,” said Nellie, “and a lot of people have a hard time passing the test due to speed. The state requires being able to record 225 words per minute (wpm). This is the reason there is a terrible shortage of court reporters.” Nellie added that the average individual can talk at least 140 wpm or above. Those on the witness stand speak low and slow.

When a judge is summoned to another town for court, where the judge goes, the court reporter goes also. She said most cases will come to Tuscola.

Nellie said the felony case load has increased as well as more juvenile cases. She feels Interstate 57 is part of the reason.

The only injury from her job is a crooked finger from all the shorthand. She said the real reason she is retiring is because her equipment is wearing out, that is her typewriter, and you can’t get replacement parts. “Years ago, I had a big case and had 3,000 pages of transcript,” says Nellie.

Nellie has enjoyed working with Becky Lucas, Douglas County Minute Clerk/Deputy Clerk since January, 1985. Becky sets cases for hearings and is Administrative Assistant to the judge.

At the end of this interview with Nellie, Becky talked with her about her open house and they set the date for Friday, Feb. 21. Nellie told Becky that she would make cookies for the open house. Becky informed her that after over 50 years she believed she (Becky) could take care of the planning. That is just something Nellie would do. She is also known for her delicious fudge. This is a lady with a lot of talent and just keeps giving and giving.

Nellie was guest of honor at an open house on Feb. 21 held in the most appropriate place, the court room on the 3rd floor where she has spent countless hours of her life. Nellie was overwhelmed with the large number of friends and colleagues that came to thank her for her many years of service to Douglas County and to wish her a happy retirement. Even though Becky and her many helpers told Nellie not to bring anything, she arrived on Friday with her delicious homemade fudge. She wanted to make sure there was enough for everyone…and it was wonderful.

Nellie and Bob will celebrate their 62nd anniversary on February 28. Son Gary is 61 and resides in Camargo. He has one son, Dakota. Son Brent is 57 and he and his wife Colleen live in Marlboro, CT. They have one daughter, Ashley, and a son Joey. Nellie and Bob plan on doing some traveling and enjoying life and their family. Bob started out as an Industrial Arts Teacher in Newman and retired as principal at Homer High School.

Nellie’s retirement will leave a void at the Douglas County Court House. She has made so many good friends over the years. I am sure there was an empty feeling at the court house on Friday because Nellie left the building to start a new adventure in her life.