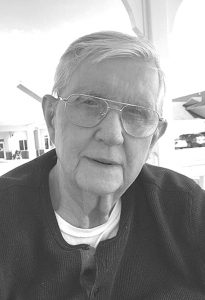 Robbie is preceded in death by his parents and sister Dorothy Mefford.

Robbie was born on May 31, 1932 in Redmon, IL, the son of Willard Lemuel and Beulah Violet Robinson. He worked on the family farm until he joined the US Army in 1950 and served in the Korean War.  He married Ramona Fear in 1952 and they had three children together.  In 1989, he married Sandra Saltsgaver and they spent 31 beautiful years together.

Robbie worked at USI in Tuscola for 13 years.  Afterward, he worked as an auto mechanic and owned two service stations.  He finished his career at Kraft in Champaign, IL.  After retirement, he drove for Gould’s Bus Service.

His family meant the world to him and there wasn’t a time he wouldn’t outstretch his hand to help.  He was a member of the Masonic Lodge and was a faithful member of the First Christian Church in Tuscola, Il.

“I Run Real Fast, Grandpa”…. It’s your time to run now Grandpa, and we will see you again.

Visitation was held from 10:30 a.m. until the time of the service on Saturday at the church.

In lieu of flowers, memorials are suggested to the ASPCA or St. Jude Children’s Hospital.