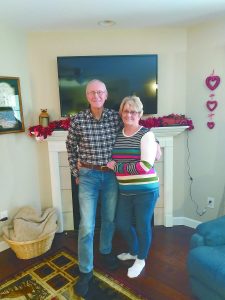 By Tony Hooker
It’s that time of year again.

No not tax season, though visions of W2’s and tax filings are dancing through people’s heads.

I’m talking about Valentine’s day. The annual celebration of love and all of its spectacle.

In past years, we’ve met high school sweethearts who are still going strong, newlyweds and some have been married for half a century or longer.  This year, we get to meet a pair of seasoned citizens, David and Jean Olson, who are newlyweds at the tender ages of 75 and 76, respectively.

How long have you two been married?
<JO> A year and a half.

And how long did you date before that?
<JO> nine months.

How did you meet?
<JO> A couple of years before I met him personally, he had come into Monical’s with his son, Brian Olson.  Our family is close with the Olsons, but we never knew of David, so I didn’t see him anymore.  Then, one day at church, in walks this handsome guy, Dave Olson! <both smile> I went home and told Cheryl (daughter) “That Brian Olson’s got the best-looking dad,” and she said, “Oh mom, forget it!”, so I saw him again the next few Sundays.  There was a church board meeting and Brian is on the board, and I said “Brian, give me your dad’s phone number. I’m going to call him.”  He looked at me like I was crazy! <laughs> This is the truth.  I called him up and said, “Hey Dave, would you like to go to a movie today?” and he said “Yes, What time?”  The man didn’t know me, but he picked me up and that was our first date.  He told me with every date that he wouldn’t ever get married.  I wasn’t looking for a husband, either.  We went out for three or four months and I started falling in love with him and he said, “I can’t say those words.”  He always stressed that he wasn’t getting married, and that was fine because I’ve been single for twenty-seven years.  We went out for a while and Dave bought this house.  We were in his little apartment and he said, “You’re going to move in aren’t you?”  I told him I couldn’t move in and he said, “If I marry you, you will!”  and that’s how I got my proposal!  I was divorced for twenty-six years.  My life was my work at Monical’s and the church, and that was it and I never thought I would find someone.  It’s been great.  I love him to death.  God’s blessed me with a good husband.  He’s a church person, which I love.  We’ve been on a cruise, we’ve been on two little trips, and I never got to do any of that stuff?

How long were you single before you started dating?
I was single for a little over a year.

How did you come to live in the area?
<DO> I came from Lake of Egypt.  I wanted to be closer and my son Brian lives here.  I lived in Tuscola for a while.

Jean, are you originally from Indiana?
I’m actually from Pesotum.  I got married and divorced and I moved to Shreveport, Louisiana.  I’ve always loved Indianapolis, and I was back over there.  Pam lived here, and I moved here.  Cheryl had just graduated from college, and I had James and Charolie still living at home.  We were all back here together.

How many children do you have?
<DO> I have four sons.

<JO> I have five.  Three girls and two boys.

<DO> I have six grandkids.

What has integrating all of that together been like?
<JO> My kids love him.  They call him Papa Dave.  They loved him right away.

<DO> My kids, other than Brian, don’t live around here.  The other three live up around Chicago and Bloomington.

Have you gotten all of your families together?
<DO> We don’t get together with both families often.

<JO> We had a surprise birthday party for him at Monical’s and we filled that room up!

<DO> The kids know each other, but don’t really associate with each other.

What did you learn from your previous relationships that you brought into this one?
<JO> Be nice and quit fighting.  Don’t argue.  I’m not lying, I had to calm down a lot and change my ways.

<JO> I never knew love.  I’ve been married before, but I’ve never known love like Dave loves me.  He loves me, and I can’t believe it.  We go to the same church, I never asked him to go, and right away he got involved.  It’s been God first and then family, I really believe that way. We’re just happy to be together.  We know we’re older and life is good.  That’s what Dave always says.  “Life is good.” It’s just awesome.  I’ve had people say, “I wouldn’t get married at your age,” and I always ask them “Why not?”

Were all of the kids on board?
<DO> They just want us to be happy.

<JO> We were going to get married here, but we go to Victory Church and everyone was wanting to come to the wedding, and one day I said, “Let’s just go to Vegas, do you want to?” and he agreed.  We met my other son out there and we got married. The whole thing took probably ten minutes.

<JO> It was so hot; you couldn’t hardly walk outside.  It was the worst time to be in Vegas.  I think if we had to do it all over again, we’d just go to the courthouse in Tuscola.  It would be so much simpler.  It was great and I’ve not regretted one day.  I’ve never had a Valentine husband.  I never got Valentines on Valentine’s day before.  He brought me home a dozen roses one day, just because and I didn’t know what to say.  The biggest thing is just to be kind to one another.

What’s the future look like for the Olsons?
<JO> Traveling.   We both still work.  I work three days a week, and he works three hours, five days a week.

Where do you work?
I work at the Fitness Center in Tuscola, five days a week from 8-11 in the morning.  That’s my part time job.

What advice would you give for someone who might be walking the same path that the two of you are walking?
<JO> I say “Go for it. Enjoy your life!”

<DO> Let your heart be your guide.

<JO> That’s good but put God first.  I promise you; all things work together with God in it.  We met through church.  He wouldn’t let me sit with him for the first month or two! <both smile>

<JO> Oh, a lot!  We do things like shop together.  He’s got plans to go out west this summer, and then in December, we plan on going back to Marco Island. Who knows what we’ll be doing in the meantime?  We’re busy all the time.