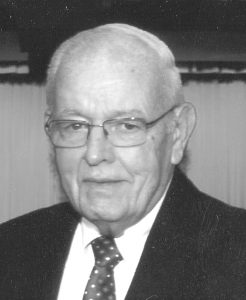 A graduate of Tuscola High School in 1953, John earned a bachelor’s degree from EIU in 1957 in Industrial Arts and was a member of the Sigma Pi Fraternity at EIU. He was drafted and served two years in the United States Army stationed in Germany. After serving in the military, he resumed a career in education that spanned from 1960 until 1999. He began teaching and then completed a master’s degree in Administration from ISU.  As an administrator, the majority of his years were spent as the high school principal at Lena-Winslow and Meredosia-Chambersburg high schools. John concluded his professional career with the Department of Corrections in Brown County.

John and his family were members of Chambersburg Christian Church before moving to Springfield, IL in 1999 where he and Mabel became active members of West Side Christian Church. He and Mabel also volunteered for the Lincoln Museum and Sangamon Auditorium.  In his spare time, he supported the Fighting Illini and EIU athletic teams, enjoyed woodworking, traveling to Hawaii, and morning coffee at Panera.

John was preceded in death by his parents; and one sister, Mary Jo Sebens.

Funeral Ceremony was held at 10:30 a.m. on Saturday, February 8, 2020 at Butler Funeral Home-Springfield.