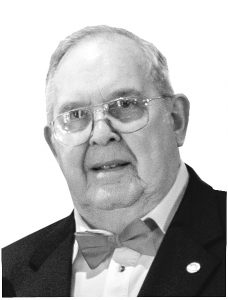 Dennis Ryan Hayes passed away peacefully in his sleep in the early morning on February 2, 2020 surrounded by his entire family. He was born in Alton, Illinois on March 21, 1940.  He was raised by his loving parents George and Sue Hayes in Mattoon, Illinois.  He attended Mattoon High School and graduated in the class of 58’.  He pursed his degree in Accounting and graduated from Indiana University in 1962 and then attended Air Force Officer Training School and was commissioned as a Second Lieutenant in 1963. Shortly after commissioning, he married the love of his life, Juanita Marie Hausmann of Tuscola, Illinois. After numerous assignments to include Turkey, England, Germany, Thailand, and other stateside bases, he retired as a Major after 20 years of service from the Air Force Audit Agency at Randolph Air Force Base. He then went on to work for various financial firms and ultimately retired a second time after a career at USAA. He was active in the Boy Scouts of America for most of his adult life, teaching adult leadership courses. He led three high adventure Treks at Philmont Scout Ranch. During retirement he enjoyed cruising around the world with Juanita, spending time with his grandchildren, and looking forward to the next family gathering. He is survived by his wife of 56 years, three children and five grandchildren, son Pat (wife Maria) and their daughter Harley, daughter Angie Fitch (husband Johann) and their daughters Sydney and Megan, and son Mike (wife Jennifer) and their sons Ryan (wife Erika) and Dylan. He was preceded in death by his parents, and an infant grandson, Timothy Joseph Hayes.

You are invited to sign the Guestbook at www.porterloring.com