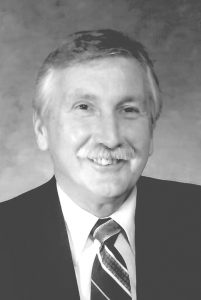 Bill Sargent, 85, of Champaign, loving husband and father of two daughters, passed away on February 5, 2020, at 8:46 p.m. in the comfort of his home in Champaign surrounded by his family after a long illness.

A Celebration of Life will be held Friday, February 21, 2020, at Morgan Memorial Home, 1304 Regency Drive West, Savoy.  The Sargent Family will welcome guests at a reception at the church from 4 to 6 p.m. prior to the service at 6 p.m. to share memories of Bill.  Morgan Memorial Home, Savoy, is assisting the family with arrangements.

Bill Everett Sargent was born November 22, 1934, in Arcola, the son of John and Alberta Earley Sargent.  He was a 1952 graduate of Arcola High school where he excelled in football and basketball and received a BS in Education and a Masters of Administration from Eastern Illinois University in Charleston.

In 1953, Bill married the former Patricia Hudson and the couple celebrated 66 years of marriage together.  She survives.

Bill loved his family beyond measure and they survive to carry his legacy forward including daughters Sue (Paul) Cook of Mahomet and Champaign and Barbara (Philip) Waters of Tuscola; a brother, Ken (Pat) Sargent of Tuscola; grandchildren Taylor, Ashley, Zach and Katie; and great-grandchildren Alyssa, Bailey, Hadley, Hudson and Remington.

Bill was preceded in death by his parents.

For seven years, “Mr. Sargent” as he will be lovingly remembered by thousands of former students, taught math at Arthur Junior High School.  He was a principal in the Momence School District for one year before accepting the position of principal at the brand new East Prairie Elementary School in Tuscola in 1969.

Mr. Sargent would go on to serve the Tuscola School District for 22 years.

When Dan Powell was a first-year principal at Villa Grove Elementary School in 1975, he made several calls to Bill Sargent “seeking the wise counsel of a man I wanted to emulate.”

“Bill was a ‘no nonsense’ kind of guy that set high ethical and professional standards for himself and expected the same for those around him,” recalled Powell.  “He recognized that all students were blessed with different abilities and interests and wanted each and every one of them to reach their individual potential.”

Sargent had a special place in his heart for children from underprivileged backgrounds.  If they couldn’t afford a warm meal, he personally made sure they had one. With the assistance of local women from the Catholic Church, Bill set up a room in the school where children with worn out clothing or shoes could actually “shop” and proudly choose new apparel.

“Bill was the first person a student could go to for help if they had a problem,” said Powell. “He really cared about the kids.”

Tuscola mayor and former student Dan Kleiss echoed Powell’s remarks and added that the first thought that came to mind when remembering his former principal was “respect.”

“Even at a young age, Mr. Sargent created a sense of discipline among his students so that we knew that we didn’t want to cause a problem and have to be sent to his office,” said Kleiss.  “But when the occasion was a good one, his office was the best place to be!”

In retirement, Bill expanded his passion for hunting and fishing while exploring the world with his wife, Pat, by his side.  The couple camped and traveled extensively throughout the United States and abroad.

As a true nature lover, Bill will always be remembered wearing waders and fly-fishing while standing in Bennett Springs State Park, Lebanon, Missouri.

The family would like to thank all of Bill’s long-term caregivers and Champaign Fire Department Lift Assist for their compassionate care during his illness.  In addition, appreciation is extended to Carle Hospice professionals and Clark Lindsay’s At Home Caregivers for the peace and comfort extended to Bill and the Sargent family during the final weeks of his life.

Memorial contributions are encouraged to the CU Church, 107 S Webber Street, Urbana, 61802; the Salvation Army of Champaign County; or to pay Bill’s generosity forward by completing a random act of kindness to someone in need. Online condolences may be shared with his family at www.morganmemorialhome.com