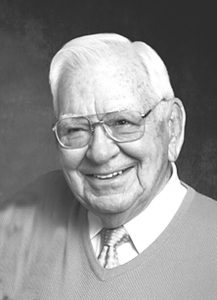 William Weir Victor, a combat veteran of World War II, a retired senior vice president of Cincinnati Bell and a former chairman of the board of public television station WCET, passed away peacefully in the company of his family Jan. 21, 2020. He was 95.

Mr. Victor was born April 16, 1924; grew up among the cornfields of central Illinois; married his high school sweetheart; fought in the Battle of the Bulge, earning two Purple Hearts and a Bronze Star; remained in the U.S. Army Reserve Signal Corps for twenty years, retiring as a Lieutenant Colonel; earned an electrical engineering degree at the University of Illinois; worked his way up the ranks at Cincinnati Bell from splicer’s helper to senior vice president; and served his community as a board member of WCET, Goodwill Industries, the Cincinnati Infrastructure Committee, the Solid Waste Management Committee of Hamilton County and the Cincinnati Area Geographic Information System.

Mr. Victor was defined by family, friends, community, country and service. He loved golf, read the newspaper every day, traveled widely, tinkered with electronics, and attended church. His capacity for friendship was infinite. He made friends every day, and he never let them go.

A memorial service will be held Feb. 15 at 2 p.m. at Armstrong Chapel United Methodist Church, 5125 Drake Rd, Cincinnati, OH 45243. A reception will follow in the church fellowship hall. Memorial contributions may be made to the International Free Expression Project online at www.ifep.io or by mail c/o New Sun Rising, PO Box 58005, Pittsburgh, PA 15209.