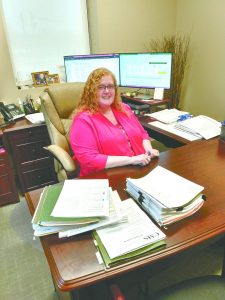 By Tony Hooker
With several major projects looming on Villa Grove’s horizon, it seemed like a good time to check in with Jacki Athey, Villa Grove’s city administrator, who serves as the main point of contact for most of the city’s interactions.  In the first of a two-part interview, Athey talks about the new Community Building, the Sycamore street (Highway 130) bridge replacement project and so much more.

For those who might not know you or your role, how long have you been with the city?

Twenty-six and a half years.

What was your first job at the city?

I was hired as an office clerk, primarily doing water billing.  Within a few months, I became the city treasurer.  I started preparing the reports for the council to pay bills, some AP, some of those other functions with the day in and day out operations of the city.

What’s been the biggest change in your nearly three decades of work for the city?

Day in and day out, probably the technology.  The first claims reports that I did for the council were in a DOS Lotus program.  Of course, now we have windows excel.  We have software that’s in the cloud, basically, so as far as the hands-on components of a forty-hour week, I would say the tools we need to get the work done have gotten a lot better.  We have more time to do more work.

I oversee most of the personnel functions of the city.  I attend all the meetings and take care of what the council wants enforced in terms of ordinances or policies.  I’m sort of a go-to for all the department heads if they have spending that they need to do.  I deal with auditors, engineers, and attorneys as a liaison and relay things back and forth.

You’ve been in the new city office at the water plant for how long?

About seven or eight months now.

When you do a project of this size and stature, it’s not always going to be smooth sailing.  What are your thoughts on how the project has moved forward?  Would you want to talk about that process?

I think that actually the construction process went fairly smoothly.  There’s always a concern when you’re going through spring and summer months that there will be delays, but I think that overall, the contractors did a good job of staying on track and getting us up and going.  We didn’t have anything that came up suddenly to trip us up where we were no longer dependent on the old plant before we were able to use the new one.  It was a smooth transition.  Other than the problems with the scrubber that we’ve talked about, with it being too efficient there haven’t been many issues.  That’s something that we’re working on, and hopefully we’ll have a positive result, really soon.  We recognize that there has been an issue with the sulfur smell, and we’re working to correct it.

What steps are being taken?

We’ve met with the engineers and the vendors who coordinated and designed the piece of equipment that is the problem to figure out what went wrong in the process so that when it’s corrected something else doesn’t fail and that it doesn’t happen again.  We’re looking at both the short-term and permanent resolutions to the problem.  We know that a temporary fix is already in the works, and we’re literally just waiting for a truck to deliver the replacement media.  The permanent fix should be ironed out here in the next couple of months.  I hope that people don’t think that we’re not trying to stay on top of it.  We come in and out of this building several times a day, and we definitely want it fixed! <smiles>

With this project in its final stages, there are several more major projects in the works.  Would you care to elaborate?

We’re very excited about the Community Building project because we got the grant that we’ve worked on for quite a while.  We originally started looking into that back in 2014.  It was put on a shelf, and now the state came to us and said, “Have you completed this project, because we would really like to work with you on it?”  The grant application that they approved was actually specifically done for some of those projects that they wanted to do at the time but either didn’t have the political climate or the funding to complete at the time.  When that grant award was announced, it was specifically for a small group of projects that they wanted to fund so it was just a matter of updating some numbers, resubmitting in current formats and going forward.

The state actually sought us out to complete the grant that we originally submitted in 2014?

They did.  I got a phone call in mid-October of 2018 and they said “if you’ve not done this project yet and you believe there’s still a need and you have interest in it, we would like for you to resubmit.  Of course, over time, there were some drastic changes in the grant world in Springfield and they told us they would let us use our prior grant application, but that it would have to be resubmitted in the current formats.  We didn’t have to recreate the wheel as far as the drawings are concerned, but we knew that construction costs have gone up and update the numbers and go from there.

And that was minus the public safety building from the original plans?

The original grant is only for recreation, so at the time of the original submission, the drawings we turned in were of the whole building, but the parts they’re not interested in were shaded out.  They can’t use recreation money for anything but that.  The Parc programs are for indoor recreation and their OSLAD programs are for outdoor recreational opportunities.  OSLAD is actually what we used to create the park twenty years ago, so we were familiar with how it progresses and what it’s like to do a project with DNR.

Will there still be an emergency services presence in the new building?

We had to tweak the drawings slightly because we no longer needed an entire city hall or fire department attached, but we made sure to tell the architects that we didn’t want it just lopped off without the potential for anything else out there if we needed it. Technically, if we ever need it, there is the potential to grow, not just south but east and west as well.  Twenty or thirty years down the road, if someone says we’re out of gym space again, we need more, there’s space for that as well as whatever we would want to go south.

Can you give us an update on the Route 130 bridge project?

IDOT had a preconstruction meeting a few days ago.  I wasn’t able to attend, but I got an email from the project engineer, reviewing what they had gone over.  Our portion of the project is technically limited to moving the forced mains under the river.  They’re sharing in that cost, but that needs to be done potentially before they can start construction.  Right now, they anticipate having their contractors in town in about 4-6 weeks.

To move the forced mains?

No, to start on the bridge work! <laughs> We could pray for a drought to start tomorrow so our contractors could hopefully be able to get in and get those lines moved.  They didn’t really clarify if there is any preliminary work that they can do in conjunction with the lines being moved, but I know that when they get down to closing one lane or the other and the underneath work, the mains will have to be out of their way.  Unfortunately, we had a pretty wet year, and by the time everything was submitted and approved by IDOT, we were going into winter again.  At some point, they may just have to put some hip waders on and figure out how to use that heavy equipment down there.

How understanding is IDOT regarding things like this that are out of the city’s control?

I think that even the state doesn’t argue with Mother Nature too much! <laughs> They realize the lay of the land and that we’re dealing with an area that holds water unless it’s drought conditions.  Twenty-six years ago, when we put the lines in, we anticipated that they would increase the size of the bridge when they came to replace it, but it is what it is.

All of these projects take money.  The city is stable enough financially to support multiple projects of this scope?

We are.  I think the city is in good financial condition.  I think that we’ve done a lot of repairs that needed to be done without overstepping.  When we see a need, we don’t just run ten plus passed that.  Every year in our budget process, we look at each department’s needs in equipment and infrastructure. Obviously infrastructure is a huge expense, and we’ve focused on that a lot more the last two years than we have previously.  I think overall, we’re doing ok.  Literally, cash in the bank, we’re sitting on 3 or 400 thousand dollars more than we were a year ago.  Part of that is the water rate increase, but we’ve just started incurring the payments from those loans. There’s a lot of regulation with those loans.  Even though they give them to you, you have to have the reserve in case there would be something drastic that happens, you can still make those payments, regardless of some disruption to your cash flow.  There’s some money that’s not invested, but there are rules that say that we should keep some there just in case.  We try to do that without stashing money back that we don’t need.

That’s kind of a misconception isn’t it?  That the city can use their revenues in any way that they want?

Absolutely.  There are multiple funds that are based on how the revenue is generated.  If you have income tax or sales tax or some general revenue that isn’t attributed to something specific, it goes into your general fund.  Those funds are used for the public works department, for police and fire, for some of the administrative costs of the city.  Then you have your water and sewer which are considered proprietary funds.  The goal there is to charge a rate that will pay your expenses, pay your payroll and for any debt service that you have, and that’s it.  It was never to make a profit as a public utility, so whenever we set rates, we have to try to figure out if chemical costs are going to increase or if there is some renovation or repair that’s upcoming that we need to work into those numbers.  We try to keep those numbers as spot on as we can because we don’t want people to have to pay more than what it’s going to cost us to run the facility.   (Next week, the Old water plant demo, McCoy subdivision waterlines, and other projects).