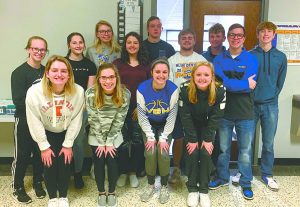 By Tony Hooker
Villa Grove schools have long taken pride in the participation of their student athletes in Special Olympics.

What hasn’t always been apparent, however, is the love and dedication that these athletes’ peers have for them.  How loyal and dedicated are these friends, teachers, mentors and coaches?

Well, they’ve agreed to jump into freezing cold water in Charleston as part of the 2020 Polar Plunge, to raise funds for their trip to the special Olympics competition.

I sat down recently with Madie and Chase Burwell, along with Taylor Wilson and the indomitable spirit who leads it all, Sondra Burwell, to ask them about their motivation for jumping into a freezing lake, along with a great many other things.

First of all, when is the Polar Plunge?

Taylor, what led you to decide to participate in this event?

<TW> My mom has been involved in special education for a while, so I’ve always been kind of curious about it.  I hit up Sondra a little while ago to let her know that was something I’m interested in, and it just led me to the Polar Plunge.

For those who don’t know, Madie, what is the Polar Plunge all about?

<MB> You jump into freezing water to raise money for the special Olympics.

You’re basically get pledges to jump into a freezing lake?

Chase, what lake are you jumping into?

Madie, why did you choose to get involved in Special Olympics? Is that mom’s influence or is it something that you came to on your own?

<MB> It started out as mom’s influence, but I’ve gotten really close to all the athletes, so it’s all about supporting them, now.

How about you, Chase? What compels you to keep doing this?

<CB> I’m also pretty close to a lot of the athletes.

Do they look up to you because you’ve been a football stud?

<CB> One could assume. <All laugh>

Do they make that special connection with you on game nights?  Do they come out and support you?

Sondra, I hear that there is a special fund raiser taking place soon, can you fill me on the details of that?

<SB> We are getting ready to do Villa Grove’s own polar plunge where all the athletes are picking a staff member of the school.  For a week, we’ll be raising money in jars, and whoever raises the most money will have to help their do their plunge.

They’ll get a bucket of water dumped on their head outside?

It’s going to be more than a bucket of water.  We’re working with the fire department to help us out.  We’re trying to get a dunk tank, but it’s looking more like it will be the holding tank.

Do you think you’ll catch pneumonia when you jump in this freezing lake, Madie?

You’re not nervous about it?

I’m not nervous, I’m excited about it.

How about you, Taylor?

Do you see this (Special Olympics) being something you’ll be involved in for the rest of your life?

<MB> It’s really exciting to see how happy it makes the athletes, so I want to always be a part of it.

How about you, Chase?

Yes, I’ll be doing something in the genre, for sure.

Taylor, you’re choosing a career in the field, so you were telling me earlier about what you’ve chosen as a career?

<TW> I want an early education teacher with an enhancement in special education.

Madie, if you were trying to talk someone into coming to support something like this, how would you entice them?

Although it’s freezing, it means a lot to the kids. It means so much more when you see their faces when you do support them.

Chase, the old cliché is that you get so much more than you put into things like this.  Is that true for you?

Taylor, what’s been the most rewarding part for you?

<TW> I think pretty much just being in the classroom, making the connection with the kids in general, because them seeing a new face, having a new person to be their friend and be their support system is great.  You can tell that they know that you’re there to be their support system and I think that’s the biggest thing, just knowing that I’m making a difference in their lives.

Getting back to the Villa Grove Polar Plunge, it’s the athletes themselves, not the plungers who are doing the plunge at the school?

<SB> Yes, the Olympians themselves.  The reason we are doing the polar plunge is because Special Olympics is such a special thing in the kids lives.  They are funded on four different fundraisers, the polar plunges.  We chose the Glow Plunge at EIU, but we wanted to be certain that we were giving something back, and so we chose this year to start doing the plunge. Each kid has to raise $100 to participate, so the Villa Grove plunge is a way to help them reach that goal.  We have thirty participants on our team right now, and sixteen of them are students.

<SB> Our team name is the Freezing Minions, and if we raise an average of $200, double the minimum, Mr. Beck will shave his head and go as Mr. Gru.  He’s always supportive, and he’s a fun-loving guy.  That’s why we all love him!