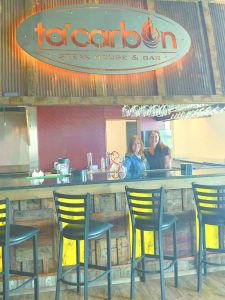 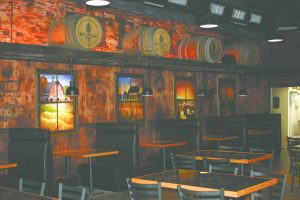 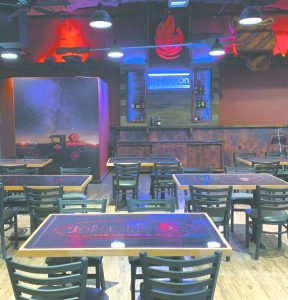 By Kendra Hennis
Ta’Carbon Steakhouse will be opening in Tuscola on Route 36 in just a few weeks. The restaurant, named by owner Ezequiel Fuentes’s daughter, is a steak house featuring many types of American cuisine and a full bar.

Walking in, I was blown away that this was the same building that was once Proud Mary’s bar. The building is now split in two separate sections, each with their own entrance. The bar side opens at 10 a.m. Monday through Saturday and at noon on Sunday. The restaurant side is open from 4 to 9 p.m. Monday through Thursday and 11 a.m. to 10 p.m. Friday through Sunday. Each side will also feature their own menu; however, when both are open you can get food from either side regardless of where you’re sitting. Some menu items include cheeseburgers, pork chops, chicken, pasta, fish, a fried bologna sandwich, a kids menu, a seasonal signature goblet dessert, and of course different cuts of steak.

I had the chance to sit down with Bar Manager Nikki Hollenbeck, General Manager Shelia Jones, and General Manager Jim Sisco to talk more about their venture thus far, and what they’re most excited about.

They wanted to begin by thanking the community for their support during the building process. Jim noted that there was much more time needed than was anticipated from the beginning. They found that it was important to “change the look, but keep the history of the building.” They were very thorough in their process, even working on soundproofing rooms so that guests on both sides could have the most enjoyable experience.

They decided to move forward with a steak house in Tuscola because it was something different and just something else our town needed. They’re excited to start seeing their old customers, and make many new regulars. They hope to become known as “the place to go in town for food and spirits.”

The staff has been lucky to be able to sample a lot of their menu during their set up, and these are their favorites. Shelia’s favorite has been the Ribeye steak, Nikki said the fried catfish was so good that she “had it for lunch, and then wanted to have it for dinner the same day”, and Jim’s favorite is the bourbon-glazed porterhouse pork chop, but he says if you’re looking for a challenge then try the 24 ounce porterhouse steak.

Although they are getting close to finishing there is still some more work to do. Check out the Ta’Carbon Facebook page for the official opening date. There will also be a very special surprise grand opening weekend, so make sure to visit and grab a porterhouse steak and one of Nikki’s specialty cocktails!