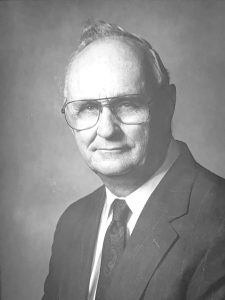 Wendel Goodwin, 96, of Palestine, Illinois, died on December 26, 2019, at Timber Creek Village in Robinson, IL. He was born on April 20, 1923, the son of Ray & Mary (Buser) Goodwin, both of whom preceded him in death. He married Ruth Evelyn Espy on June 2, 1946, and she preceded him in death on May 8, 2013. He was also preceded in death by his brothers, Reo Eldon Goodwin and Glen Wesley Goodwin.

Wendel was a lifelong resident of Crawford County and was a 1941 graduate of Palestine High School, having served as the class president. He dedicated his life to tending to the fields as a farmer. It was more than just a job to Wendel; it was his calling and his passion. He truly enjoyed the work he did, and he did it with vigor and in partnership with Ruth Evelyn. He had a heart for his community, and was an active and vital member of a number of local organizations: the Palestine Lions Club, where he was a Past President and Treasurer; the Crawford County Farm Bureau; the Crawford County Extension Board; the FHA Board; as well as Farmers State Bank, where he was a board member for twenty years, the last five of which were spent as Chairman of the Board. A man of faith, he was also a lifelong and devout member of Green Hill Methodist Church prior to its closing, at which time, he joined the Palestine United Methodist Church, where he served as a trustee and was also a member of the church board.

Wendel put his faith on display every day, not just Sunday. You could see in the way he lived his life that he “walked the walk”: he was an honest and humble man whose creed was to do what was right. He was a good and decent man who made the world around him better by simply being part of it. Those who knew him will remember not only his devotion, but his quick wit as well. He lived a good life, and we have no doubt that on Thursday, he was met with the words, “Well done, my good and faithful servant.”

A time of visitation was held from 4:00 to 7:00 p.m. on Sunday, December 29, at the Goodwine Funeral Home in Palestine. Funeral services will be held at 10:30 a.m. on Monday, December 30th, at the Palestine First United Methodist Church with Pastor Jim Conlin officiating. Memorials may be made to either the “Palestine First United Methodist Church” or to the “Palestine Lions Club,” with envelopes available at the church. Burial will be in the Palestine Cemetery. For more information, or to share a memory or condolence online, please visit www.goodwinefuneralhomes.com.