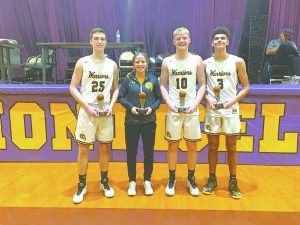 By Lenny Sementi
Tuscola’s boys basketball team celebrated its first championship at the always-loaded Monticello Holiday Hoopla Tournament Saturday December 28 beating a very good Paxton Buckley Loda team 45-39 in a low scoring affair. It was the Warriors fifteenth visit to the tourney and the third under third year coach Justin Bozarth. With the victory the boys in black and gold remain undefeated improving to 12-0 overall.

Tuscola’s NCAA Division 1 recruit Jalen Quinn drew a lot of attention on the offensive end and was held with out a field goal for the first nineteen minutes of the game. The sophomore did most of his damage down the stretch scoring thirteen of his game-high fifteen points in the final thirteen minutes of action. Grant Hardwick shared the top spot with Quinn in the scoring list sinking four threes in the title tilt en-route to fiteen points, ten points of which came after the break. Jacob Kibler tallied points in three of four frames adding seven points to the team totals and Cole Cunningham checked in with a pair of threes.

Quinn was a jack of all trades delivering four assists, four steals, three blocks and also helped the Warriors out on the boards posting a double-double grabbing ten rebounds, four of which came in the pivotal fourth quarter. Kibler and his senior classmate Ben Dixon followed with six boards apiece while Hardwick and Donovan Chester each hauled in four.

The two area heavyweights traded points and leads early but a late four point run by the Panthers gave them a 12-10 advantage at the first buzzer. They continued the run with two more hoops to open the second running it to 16-10 heading toward a 22-17 lead at the break.

A trey by Hardwick to open the second half answered back to back baskets by the Panthers early in the third frame. Quinn followed with his first field goal of the game with under six minutes left in the stanza and the race to the finish was on. Hardwick stepped outside the arc for his second three of the period and Cunnigham followed with a three of his own cutting PBL’s lead to two heading to the fourth on top 32-30.

Hardwick opened the fourth hitting the front end of a one and bucket by Quinn pulled Tuscola to within one 34-33 setting the stage for a runner by Kibler that put the Warriors up 35-34 a lead they would not relinquish. A Panther turnover led to yet another trey by Hardwick at the 3:40 mark and a jumper by Quinn on the next possession forced the Panthers to foul in and attempt to lengthen the game. Quinn had other ideas keeping the ball in his hands down the stretch slamming the door at the line making five of six in the charity stripe in the final three minutes of the game securing first place hardware and  the Warriors twelfth victory of the season.

“The overall Hoopla experience was obviously great for us accomplishing something that hasn’t been done in our program history,” the coach stated. “It was a great atmosphere tonight for a Saturday night in late December for high school basketball game. We went through a spell in the second quarter where we didn’t score for nearly six and a half minutes. When we got to the locker room at half, both Coach (Bob) Taylor and Coach (Jacob) Hilgendorf pointed that out to me and followed it up with, ‘and we are only down five.’ That was the message we gave to the team, stating we weren’t going to have a scoreless drought like that in the second half. We felt that as long as we continued to guard at a high level, we’d keep it close in the second half and give ourselves a chance to win. Grant Hardwick hit some huge shots in the second half and Jalen attacked their press with aggression.”

Cunningham, Kibler and Quinn were all selected by the coaches to the ten-man Hoopla All tourney team. Cunningham erupted for seven threes in one game and twelve total in the tournament. Quinn found his way to double-digit scoring in all four contests while Kibler was right there with him accomplishing the feat in three of the four skirmishes. All three were also strong on the boards helping the Warriors win the rebound race in four contests.

“With all the excitement over the championship I think we lost sight of was how much we grew as a team during the tournament,” Bozarth commented. “We learned that we could play with high quality teams at both ends of the floor, when we guard in the manner in which we did. Our guys are taking a lot of pride in our man to man defense it has become our base defense and their confidence in it gained strength every time they stepped on the floor at Monticello.”