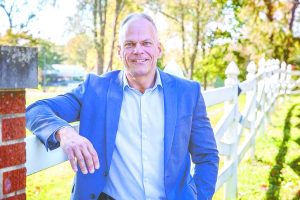 By Tony Hooker
Growing up in Douglas County Dr. Charles “Chuck” Ellington experienced many of the issues that face rural Americans regarding poverty, health care issues and so much more.  Ellington decided to turn those experiences into a career as a physician and attorney, focusing on rural issues.  I recently sat down with the Camargo resident to talk about growing up in central Illinois, his career and most importantly, some of the reasons why he chose to run for US representative in the upcoming election.

Did you graduate from Villa Grove High School?

Where do you live now?

I live in Camargo.

I have to ask, how did you come to be an MD and an attorney simultaneously?

I know, it sounds crazy, doesn’t it? <smiles> I graduated in ’86 and I went to Parkland for two years.  I was salutatorian in my class, so I got two years for free. Then I went on to the U of I and got my bachelor’s degree there, and while I was finishing up, I heard about this new program at SIU that would allow you to get degrees in Law and Medicine at the same time.  Basically, you take two and a half years of law school and squeeze it into two years, and after that you go to medical school and the last year of medical school, you do a series of combined electives like forensic pathology and forensic psychology where they give you dual credit and you graduate with both degrees.

When did you finish that program?

Let’s talk for a minute about your current venture.  You’re making a run for US Senate?

I’m running for the US House of Representatives.

What was your inspiration for vying for a seat in Congress?

It’s always been something that I’ve been interested in.  Ever since I’ve been in high school, I’ve had a desire to affect national health policy.  A lot of it had to do with the way I grew up.  I was just a poor kid growing up, but in spite of that, we were the rich ones in our family.  At the time, I had a lot of family down around Paris and Marshall who didn’t have inside bathrooms or running water, and I saw a lot of people who couldn’t afford to go to the doctor.  I always wanted to make a difference with that.  That’s why I did the program that I did.  I’m working in a rural community, in Arthur, because I’m committed to rural, underserved communities.  When I heard John Shimkus announce his retirement, I thought this would be a good opportunity to look into how I can make a difference in a larger, more systemic way.  As doctors, we have larger forces that control us and every day I face barriers to being able to provide the best care for patients and so I think we need good, clear leadership in Washington that actually understands the issues, that understands what it means to practice medicine daily, but yet still understand the policy and the law behind it.

Let’s backtrack a little, you grew up here in Villa Grove.  What are some of your favorite memories of growing up here?

Oh heavens! <smiles> I have a lot of them!  I think everyone in Villa Grove remembers cruising Main Street in high school.  I remember football games and silly things like playing football in the third-floor hallway.

<Journal> Mr. Waltrip would let you get away with that?  <smiles>

Did you move away, or have you always stayed local, other than for school?

I went away for school, and then after I graduated in 1997, I did residency training.  Everyone in medicine does residency training, mine was in family medicine, mainly because I have a strong affinity and affection for primary care.  I knew that primary care makes a huge difference in people’s lives, in fact the evidence shows that if you have a primary care doctor, we know that over time, you’ll live longer, be healthier and cost the system less money.  It’s a great deal all-around for everyone.  I completed my residency at SIU-Decatur, and then went to Arthur and practiced for four years.  After that, I went to Georgetown (University) and did additional training in health policy and faculty development.  I then came back to Decatur and worked in the residency program as a faculty member with the SIU school of Medicine.  I spent several years there, and then about 4 or 5 years ago, I was able to come back to Arthur and develop the program that I have now.  My title is director of rural health for the medical school.  I train young doctors and medical students in rural medicine, and hopefully train them to go and work in rural and underserved communities.

Do you have favorite teachers at Villa Grove?

I have a bunch!  Probably Mr. Waltrip was one of the biggest influences in my life.  When I was in high school, I thought Biology was for people who weren’t smart enough to do physics, <laughs> until I realized that Biology is basically chemistry AND physics.  Mr. Waltrip showed me that, and he instilled this absolute love for biology.  I got to see that you can do math in biology. You can do research in biology.  I remember doing a research project on tadpoles, and we got to analyze the data and do all the statistics and everything and I was just in love with it.  I thought it was the best thing in the world and I thought Mr. Waltrip was one of the best teachers I ever had.  He was just amazing.  Mrs. Meller was also one of my favorite teachers.  I credit my ability to write today based on her.  With that foundation, I was able to go on to college and compete with all the people I was in class with.  One of my best friends from Med School is from the North Shore of Chicago.  He went to North Shore Country Day, one of the most exclusive high schools, and I was able compete with him, just fine.

It does! <laughs> I went to sign a document the other day and they had a green ink pen, and I had to ask if I was allowed to use it!   Because of Mrs. Meller, green ink is sacred, and I won’t use it.

On a personal level, are you married?  Do you have children?

Yes.  My wife’s name is Anita, and she’s just amazing.  She’s the best support that a guy could ever have.  I have two boys, Gunnar is 15, and Jericho is 12.  The had been attending Arthur Christian School, but this year, we decided to home-school them.

Is you wife a local girl?

She’s from Hindsboro.  She lived out in the country and attended Oakland.  She’s an Oak.

What’s her opinion about your running for congress?

That was the biggest part of the decision making, how it is going to affect the family.  Family is absolutely a top priority.   For us, it’s God, family and country and any ambition I have has to take a back seat to family.  We talked about it, we prayed about it and my wife finally told me that it’s something I have to do.  When you see where our country is going and you see the complete failure of leadership and how divided we are, it just feels like something I have to do.

You’ve obviously got a crazy, busy life.  What do you like to do when you’re not at work?

I enjoy working out.  I try to work out every day. I get up at 4:00 every morning.  There’s a gym called second chance fitness right next to my office which is great. I go there and I work out at least five days a week.  Then I go to work and after work, I try to get a second workout in.  My oldest son is getting in to lifting weights, so I try to work out with him at least twice a week.

Are you focused on Power lifting?

I started out doing power lifting, because in high school I was so skinny! It was something I always wanted to do and then my best friend in Med school was this big Russian guy and he was a body builder.  He got me into lifting weights and taught me what to do.  Back then, we didn’t have the internet, so you had to learn from people who were willing to invest in you.  I started lifting weights with him, and then I did cross-fit for a while and a guy suggested that I check out the gym next door, which was a powerlifting gym and got connected with a trainer named Zach Roberts, and I absolutely fell in love with it.  He invested in me and it was great.  I think the world of him, because he invested his time.  In a couple of months of starting to work out with him, he was talking to me about competing in powerlifting meets.  Then, I transitioned over to body building, and I’ve been focused on that.  I think power lifting is a great base for that.  The great thing is that lifting weights is something you can do your whole life.  You don’t have to quit when you reach a certain age.  I try to encourage my patients to stay active.  I always tell them that the right program or exercise is the one that they’ll keep doing!  If lifting is for you, that’s what you should do.  If running is for you, you should do that.  If you enjoy playing racquetball or playing basketball, then that’s what you should do.

I want to express my gratitude to everyone who played a role in my development, growing up.  I think that gratitude is the key that opens all doors and I truly appreciate everything that people did.  All my teachers and how they invested in me.  My friends and their friendship.  The older I get, the more I realize that it means everything to me.

Do you still hang out with Villa Grovians?

Some! <laughs> We live in Patterson Springs, in Rosemary Nussel’s old house.  When I was a kid, I dreamed of living in that house.  Me and my friends would ride our bikes out there and I would tell them that one day I would live there and now I do.  I also have a lot of rehab projects to do, too! <laughs> My wife is really good at that sort of thing.  She can hang wallpaper and paint, and she’s been doing the lion’s share of the work, for sure.