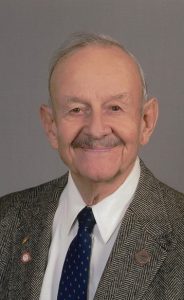 Funeral services were held at 11:00 a.m. on Tuesday, November 26, 2019 at the funeral home. Rev. Matt Stump will officiate. Military

Rites will be conducted at the funeral home by the Arcola VFW and the Arcola American Legion. Burial will be at a later date in the Odd Fellow Cemetery in New Haven, IN.

Curtis was preceded in death by his parents, one son, Leland Atteberry, and two brothers-in-law.

Curtis graduated from Arcola High School in 1952 where he Lettered in Track and played the clarinet in the Marching Band. He attended Indiana Central College for a year and a half before being drafted into the Army where he spent two years at the Yokohama Army Depot.

After he retired, he helped Byron Little farm and later he helped Terry Foran farm.

Curtis coached his son’s soccer team. He enjoyed reading and watching sports on TV, he used to bowl a lot and has had a 600 series, and he and Doris also square-danced. They always enjoyed spending winters in

Florida and Texas in their retirement years.

Curtis was a member of the Arcola United Methodist Church, the Arcola Lions Club and the Moose in Mattoon, IL.

Memorials may be made to the Arcola United Methodist Church or the Arcola Lions Club.