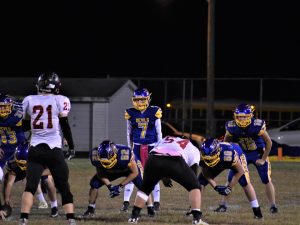 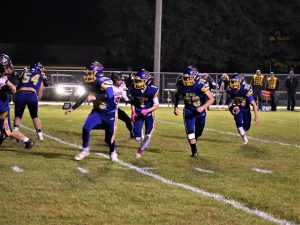 By Tony Hooker
The Devils, who said goodbye to twenty-eight senior players, cheerleaders and band members before the contest, got 205 yards and four touchdowns (9,38,14,8) from junior quarterback Blake Smith in the first half to put the game out of reach.

LSA won the toss and deferred to the second half and VGH took advantage, marching 52 yards in ten plays, despite a couple of drops from the normally sure-handed receiving corps, with the drive culminating in a nine-yard fourth down scoring strike from Smith to Ierick Sorenson (6 catches for 103 yards and 3 TD’s)

Sophomore Daelin Price then kicked off for the Devils, and a nice return from LSA’s Jalen Jones set them up at their own 37. The Lions then used a punishing ground game to drive to the VGH 36, before Chase Burwell (4 tackles, 1 qb sack) sniffed out a play action pass and threw Lion QB Brandon Kretzinger for a 14-yard loss on fourth down to regain possession for the home forces.

After a Kehm Shirley (72 yards and 1 TD on 8 carries) rush went nowhere on first down, Smith hit Isaac Mahoe for 12 yards to the 38.   Another dropped pass made it second and 10 from the 38, and from there, Smith calmly found Sorenson for the score.  Ezra Ely tacked on the extra point, and VGH led 13-0 with 2:03 left in the opening quarter.

This time, Price’s kick sailed out of bounds and set LSA up with good field position at their 42.  The Lions were able to earn a hard fought first down to the VGH 37, but an alert Keagan Patterson (4 tackles, 1 TFL, I PBU) knocked down an LSA halfback pass attempt on fourth down to regain possession for the Blue and Gold.

Ely (66 yards, 1 TD on 4 carries, 1 2-pt conversion run, 2 extra points) then took matters into his own hands, gaining 18 on first down before taking it to the endzone from 45 yards away.  Carson Howard’s two-point conversion pass from the holder’s position was dropped in the end zone, and with 10:22 left in the half, the lead stood at 19-0.

Price’s kickoff then pinned LSA at their own 29, and from there, big brother Zayzen Price took over, making 4 of his unofficial 15 tackles (2 for loss) to stop the drive and regain possession at the LSA 49.

On first down, Smith found Mahoe (2 catches for 29 yards) for 17.  Then he hit Sorenson for 18 and another first down before a play action roll out found Carson Howard all alone in the right corner of the end zone and Smith didn’t miss.  Ely’s extra point kick was good, and the Devils had extended their lead to 26-0 with 6:02 remaining in the second quarter.

Once again, a nice kickoff saw LSA starting at their own 19.  Some nice off tackle runs helped the Lions advance to midfield before Clayton Knierim (9 tackles, 2 for loss) and Patterson came up with a big fourth down stop to regain possession for VGH with just over a minute left in the half.

The Devils then used an 18-yard pass from Smith to Sorenson and a sweet 23-yard screen to Shirley to move to the 8-yard line with 13 seconds remaining.  Smith’s first down attempt was dropped, but that stopped the clock, allowing just enough time for Smith to find Sorenson for his third touchdown of the half from the 8.  The extra point attempt was blocked by LSA freshman Emmanuel Roughton, and with just 2 seconds remaining in the half, the Devils’ lead stood at 32-0.

LSA started the third quarter at their own 37 but could gain no traction and were forced to punt.  Sorenson’s nifty 21-yard return for VGH set them up at their own 46 and from their it took just four plays for the Devils to reach pay dirt once again.  Ely gained three yards on first down and then Shirley busted loose for 48 yards, setting up first and goal from the 3.  A first down run went nowhere before Shirley powered it in, and the Devils used a two-point conversion run from Ely to set the lead at 40-0 and set the running clock into motion at 6:02 mark of the third quarter.

From there, VGH began to substitute liberally, and Elijah Kiesel and Nick Coffin were able to break long runs (16 and 12 yards, respectively) on the last offensive possession of the game for Villa Grove Heritage. The Blue Devils will travel to Arthur to take on the Knights in a game with huge playoff ramifications on October 26 at 7 p.m.