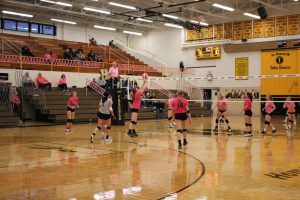 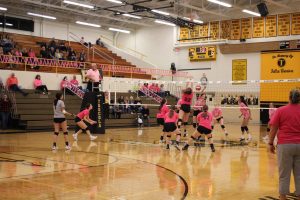 By Lenny Sementi
Tuscola’s volleyball team opened the week with a pair of non-conference opponents splitting with Westville and Paris and ended it with a big victory over a tough Meridian squad at home in Central Illinois Conference action. Coach Lydia Millers team rallied behind a combined fourteen kill effort by the Dean sisters, senior Karli and sophomore Katie, to a dominating sweep over Westville on Monday October 14, 25-11, 25-13. Then dropped a tough one to a talented Paris squad the next evening 15-25, 21-25 before downing the Lady Hawks in CIC action Thursday October 17, 5-18, 25-22 moving to 15-11 on the season overall and 4-2 in the league.

Maddie Green set Karli Dean early in game one verse Meridian fueling a pair of five point runs as the senior setter donated a match high twenty-one assists to the cause. The Warriors rode the two rallies to a 14-5 lead and never looked back. Dean hammered two more of her match high nine-kills late in the first sealing the deal on the game one win. Kate was big early in game two providing four of her six kills in set two. She also dominated at the net on defense twice stopping the Hawks from gaining any momentum blocking two of her four blocks late in the second game. The sisters posted a combined six blocks and six digs on defense.

Hope Dietrich was tops in the save department securing eight digs in the match. Kendyl Ring added three to her totals along with three kills. Amelia Bosch had three kills as well while Jessie Martin, Reagan Wyrich Marissa Russo, Grace Voyles and Laney Cummings all found their way to a pair of digs.

A few nights earlier against Westville the Deans led a balanced offensive attack where six players delivered at least two kills helping the Warriors to fast starts in both sets. This time it was Katie that led the way posting eight kills to the stat sheet. Karli was next with six kills followed by Green with four kills, Bosch three kills, and Ring and Russo who each notched two kills.

Bosch was tops in the blocks department with two and libero led the back row defense diving her way to seven saves. Green led all in the assist’s category with a match high seventeen. Martin and Wyrich combined to provide some offensive and defensive punch collecting four assists, nine digs and an ace. Speaking of aces the Warriors owned the service line thanks to five each by Green and Voyles.

Ring fired away with three aces and Green was just as strong at her setter position but it was not good enough as Paris protected their home floor on Tuesday. The senior accounted for a team high seventeen assists and seven digs but runs by the Lady Tigers early in both sets were too much for the Warriors to overcome as they suffered the home loss. Ring turned in a well-balanced effort as well adding six saves, an assist and three kills to her season resume.

Karli Dean posted three kills late in game two ending the night with nine total while her sister pounded out five kills, one dig and one block. Moyer saved a pair late in the match also on her way to a team best five saves while Russo and Voyles combined for eight saves, three kills and an assist.