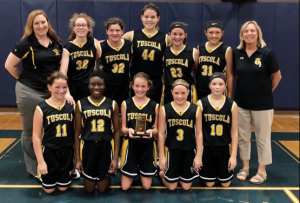 By Kendra Hennis
Seventh Grade
East Prairie girls basketball season is well underway. Over the weekend of Oct 7, the girls played three games each. Coach Beth Pugh said, “the Mahomet-Seymour Tournament is a tough competitive tournament. The schools are much bigger than we are, but we need to play these types of games to make us stronger.

Seventh grade girls took home second place at the tournament. The first game was played against Mahomet-Seymour. Taylor Gordon lead the team with six points, Lia Patterson had five points, Allison Pettry had four points, and Ava Boyer scored two points. However, it was not enough and the girls lost 17-32. Coach Pugh said “We really did not play our best, Mahoment showed us our weak points that I had been trying to tell the girls about.”

The second game of the tournament was played against Unity. Raeleigh Rusk lead the team with ten points, Taylor Gordon followed with eight points, Ava Boyer scored six points, Lia Patterson had four points, and Isabelle Sturts and Allison Pettry each scored two points. Their efforts were successful and they defeated the Rockets 32-4.

The final game of the weekend was played against Mt. Zion. Coach Pugh noted that the girls played much more aggressively this game. Lia Patterson lead the team with twelve points, Taylor Gordon followed with ten points, Raeleigh Rusk scored three points, Adrina Simmons had one point, and Emily Veach, Carly Ochs, and Olivia Wallace each had two points. This allowed for the lady Hornets to defeat Mt. Zion 32-17.

The next regular season game was held on Oct 15 against Cerro Gordo. The lady Hornets defeated the Broncos 30-4. Adrina Simmons lead the team with eleven points, Ava Boyer followed with six points, Taylor Gordon scored five points, Lia Patterson had four points, and Emily Veach and Olivia Wallace each had two points. Coach Pugh said “the seventh grade continues to improve on their defensive skills while putting pressure on their opponents, causing them to turn over the basketball. We did not let Cerro Gordo get into their offense and we did not let Cerro Gordo score more than four points. I am also seeing a lot of improvements with our offense.”

On Oct 17 the Lady Hornets took on Arcola. They defeated them 26-16. Coach Pugh said, “the girls had a tough time getting their offense started during the first half. We talked about it at halftime and made some adjustments. They then did a better job handling the pressure during the second half.” Taylor Gordon lead the Hornets with ten points, Ava Boyer and Lia Patterson followed with six points, and Emily Veach and Carly Ochs each had two points.

Eighth Grade
The Eighth grade girls also began Oct 7 against Mahomet-Seymour. Zoe Thomason and Marissa Boyer each scored three points and Emily Czerwonka and Addyson Ring each had two points. However, Mahoment was a tough team and defeated them 32-10. The second game of the tournament was also a loss to Unity 24-5. Sydney Moss scored three points and Carlina Patterson scored two points.

The final game of the day was against Mt. Zion, losing 22-25. Coach Pugh said “we did not play well in the first half, but we came on strong in the third quarter. The girls are improving, we just need to work on putting two strong halves together.” Sydney Moss lead the lady Hornets with six points, Zoe Thomason followed with five points, Marissa Boyer scored four points, Carlina Patterson had three points, and Addyson Ring and Emily Czwewonka had two points.

On Oct 15, the lady Hornets defeated Cerro Gordo 34-15. Coach Pugh said “Cerro Gordo had one really good player and we did not contain her very well in the beginning of the game. However, we changed our defense a little and we were able to slow her down. Sydney Moss had a great game on both offensive and defensive ends, she hustles to every loose ball. Emily Czerwonka also had a great shooting night.” Sydney Moss lead the team with twelve points, Emily Czerwonka followed with nine points, Carlina Patterson had seven points, and Zoe Thomason scored six points.

The girls then took on Arcola on Oct 17. Sydney Moss lead the team with thirteen points, Marissa Boyer had seven points, Zoe Thomason followed with four points, and Carlina Patterson, Emily Czerwonka, and Catie Gibson each had two points. Their combined efforts allowed them to defeat Arcola 30-15. Coach Pugh noted on the team’s improvement, saying “the eighth grade girls came on strong against Arcola to win. We had lost to them twice this year, however the girls are improving every game and our defense took Arcola out of their offense.”

The Lady Hornets are on the road next against Teutopolis on Saturday at 10 a.m.