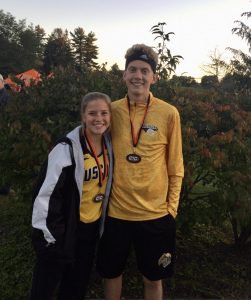 Day crossed the line earning all league honors for the second consecutive season. He ended his day four spots and ten seconds better than last year taking sixth place overall with a time of seventeen minutes and fourty-seven seconds. Tabeling ended her day in seventh place crossing the line in twenty-one minutes and two seconds. The junior has collected All CIC medals in all three seasons as a Warrior.

Missing from coach Mike Rosenbaum’s boy’s team was his number two runner. Logan Wallace who has been nursing an injury late in the season tried to tough it out but was unable to finish. Wallace entered the meet as a top eight performer. Nicolas Woods was the second scorer for the coach ending his day in twenty-first place with nineteen minutes and nine seconds. Next in line was Riley Nolan one spot back breaking the tape in nineteen minutes and twenty-six seconds.

Zach Mattingly was next literally one second and one place back in twenty-third turning in a personal best nineteen minutes and twenty-seven seconds. “Zach was highlight today,” stated the coach. “He couldn’t not have done it at a better time as the post season nears.”

River Kantiz was the final scorer ending up in the top thirty with nineteen minutes and fifty-seven seconds. Tanner Campbell, Caleb Haste and Jacob Middleton all toured the fairways of Scovil as alternates.

Faithlyn Daugherty was the number two runner for the girls finishing twenty-first overall with twenty-three minutes and twenty-seven seconds. Mackenzie Herschberger was next in twenty-second place with twenty-three minutes and thirty-one seconds. Hannah Hornaday and Hannah Lemay followed in twenty-fifth and twenty-eight to end the scoring while Kenzi Heckler served as the alternate for Tuscola.

“It was our first meet as part of their championship part of the season,” stated Rosenbaum. “And, I think we are heading in the right direction. We wind up the regular season at Wimple Park in five team event including Monticello, Argenta, Villa Grove and Bement on Tuesday and will honor our seven seniors before hosting the Regional on Saturday morning.”