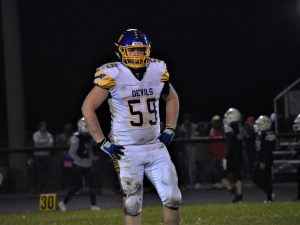 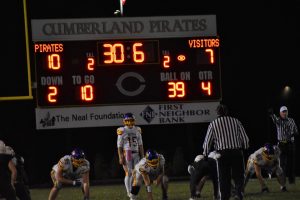 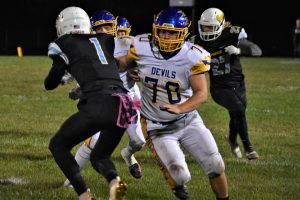 By Tony Hooker
Everyone with an interest in Lincoln Prairie Conference football could have predicted a close game when the Villa Grove Heritage Blue Devils sailed down the Embarras to face always-formidable Cumberland.

What wasn’t expected, however, was that a conquest between teams averaging 33 (VGH) and 29 (Cumberland) points per contest would become a taut defensive struggle, but that’s exactly what happened in the Blue Devils 14-10 contest, which featured one of the most improbable finishes I’ve witnessed in my 40 plus years of following the Blue and Gold.

Villa Grove Heritage won the toss and elected to receive, and a fine 36 yard scamper from quarterback Blake Smith (unofficially 85 yards rushing on 10 carries) set the visitors up with a first and ten at the Pirate 33-yard-line before a two-yard-loss by Ezra Ely (41 yards, one touchdown (3 yards) on 16 carries) was followed by three straight incompletions and VGH turned it over on downs.

In a theme that permeated most of the contest, the Blue Devil defense stood tall.  Smith (2 interceptions, 4 tackles (one for loss) and a pass broken up) snuffed the drive by knocking down a third down pass at the sticks to force a Pirate punt.  The Devil offense, aided by a late hit out of bounds penalty, at the end of a 13-yard scramble by Smith, moved the ball to the Pirated 13 before a false start penalty, a two-yard loss on a run and an incompletion ended the drive at the Cumberland 21.  The Devil defense, led by Keatan Junglas (3 tackles, one tfl) and Chase Burwell (11 tackles, 3 tackles for loss) forced a three-and-out forcing a punt as the quarter ended, knotted at 0-0.

This time, the Devil offense could gain no traction, and Elijah Kiesel, subbing for an under the weather Ierik Sorenson, punted to the Cumberland 39.  The Pirates offense, aided by a pass interference call on Smith, moved to the VGH 18 before Smith stepped in front of the Pirate wide receiver at the 14 to snuff the threat.  Again, the Blue Devils couldn’t dent the Cumberland defense, and Kiesel was forced to punt from his own 15, booted the ball to near midfield.  Again, Zayzen Price (6 tackles (2 tfl) and the defense stood tough and the Pirates were forced to kick a punt that rolled dead at the VGH 12.  A first down holding penalty moved the Devils back to the six, two Smith carries, and an Ely run moved the ball to the 18 before Kiesel once again was called upon.  This time the sophomore delivered a beauty, flipping the field with a 44-yard dart that stuck at the Pirate 36.  This time a huge Carter Smith sack (4 tackles, 1 sack, 1 fumble recovery) thwarted the Pirate drive and Cumberland was forced to punt once again.  Smith was able to find Carson Howard (2 catches for 33 yards) before his long heave was picked off at the Cumberland 29.  Smith would return the favor on the next play, however, intercepting a Cumberland at the VGH 33, where the Devils were content to take a knee and head to the locker room still tied at 0-0.

The third quarter saw much of the same, as neither offense could make headway, until the Pirates mounted a drive from the VGH 41 that ended with a 25-yard field goal to make the score 3-0 Cumberland with 3:54 left in the third quarter.  The two teams then exchanged possessions as the quarter drew to a close.

The fourth quarter began much like the third had ended, with both defenses making tough plays to stop either team from getting momentum.  Another fine Kiesel boot of 44 yards set the Pirates back at their own 29 and they moved into VGH territory before a muffed exchange caused a fumble which Smith alertly pounced on to give the Blue Devils life at their own 41. Ely and Smith took turns running the ball, advancing to the Cumberland 28 before a personal foul call moved them back to the 43.  Smith then calmly found Carson Howard for a 28-yard completion to the 18, Ely lost 3 and Smith mishandled a snap, causing a fumble that he was injured recovering, and things looked bleak for the Devils. Sophomore Liam Barr, Smith’s replacement, then saw his first pass attempt result in an interference call that gave the Blue Devils possession at the Pirate 13.  Ely, running the wildcat, gained 7 on first down.  He was stuffed for no gain on second, gained 3 on third, and powered it over from the 3 for the score on fourth down.  His extra point kick was true, and with 3:22 remaining in the game, VGH led 7-3.  And that’s when it really got interesting.   A nice return was negated by a holding penalty on Cumberland, giving them possession at their 34.  From there, Keagan Patterson made a fine over the shoulder interception and the Blue Devils appeared to be in great shape, having the ball with around three minutes remaining.   However, disaster struck on first down, as the snap from center to Ely sailed over his head, and the ball squirted away as he desperately tried to cover it up, allowing Cumberland to gain possession at the VGH 18 with 2:07 left in the ball game.  A gallant defensive stand came up just short, however, as the Pirates used their entire backfield to push their QB into the endzone on fourth and 1.  After their extra point snuck in just inside the right upright, the score stood at 10-7 Cumberland with just 44 seconds remaining in the contest.

Ely returned the kickoff to the VGH 39 and two desperation Barr heaves fell incomplete.  An illegal procedure penalty set them back to the 34, and Barr’s third down attempt was broken up, setting the stage for the game’s deciding play.  On fourth and 15, Barr dropped back, rolled to his right and chucked the ball down field, narrowly avoiding a fierce Pirate pass rush in the process.  Forty plus yards down field, his toss found Keagan Patterson in full stride, and Patterson outraced the stunned Pirate secondary into the end zone, quieting the boisterous Cumberland student section and setting off pandemonium on the VGH side. Ely’s extra point flew true, and the Devils lead 14-10 with just seven seconds remaining.  Daelin Price then squibbed the kickoff to the Cumberland 38, insuring no return.   An illegal procedure penalty moved them back to the 33, and Zayzen “Zeus” Price then got in the face of the Pirates QB, forcing an errant throw that fell harmlessly to the deck as the clock expired.Villa Grove Heritage will return to Russ Ghere Field for their final regular season home contest on Friday, October 18 at 7 p.m. versus Decatur LSA.