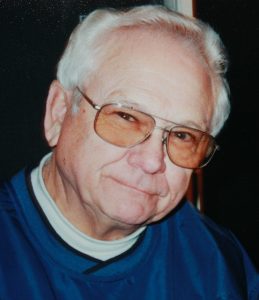 Orville was born in White Heath, IL on February 2, 1931, the son of Orville P. and Katherine (Harper) Frye, the third of four children. He was raised on a farm in Piatt County and attended Bement High School. He graduated from Argenta High School where he met Ellen Umbarger. Orville and Ellen were married soon after high school, on May 19, 1951. They were happily married for 64 years.  Ellen passed away on January 12, 2016.

Their life’s adventure began in a move to Fort Hood, in Killeen, TX, while Orville served as a finance clerk, in the Army. When his term of service ended, he and Ellen moved back to Illinois and lived for a few years in Gibson City. They then moved with their 3 young sons, Jerry, Randy and Tim, to Tuscola where he began his career at the Tuscola National Bank as a loan officer. He specialized in farm credit and finance and became Vice President of the bank and served on the bank board for many years. Next, he took a new position at the Hillard Agency in Tuscola, where he handled primarily farm accounts. He was an active member of the Rotary Club throughout his career, being named a Paul Harris Fellow. He retired from The Hillard Agency in 1996.

Following his passion for golf, Orville then began refinishing golf clubs at home as a hobby. He and Ellen soon opened O’ Pro Shop in downtown Tuscola, and later at Iron Horse Golf Course. Many family members worked alongside Orville and Ellen and helped with the family business.

Everyone who knew Orville will remember he loved the game of golf. He played nearly every day and won the Club Championship at Tri-City in Villa Grove, as well the Tuscola Open. He played on over 200 courses throughout the country. He and Ellen both had a “Hole in One”.

Orville is survived by his sons Jerry (Priscilla Kron), Randy (Kathy), and Tim (Pam), as well as Grandchildren, and Great-Grandchildren.

‘Papa” cherished his grandchildren—John, Jason, Jenna, Ross, Katie, Laura, Anna, and David; his two step grandsons, Matthew and Steve Friend; his 6 great-grand children, Cohen, Sullivan, Simon, Clark, Hannah, and Sharif. He loved attending as many of their school and sporting activities as possible, always showering them with encouragement and cheering them on from the side lines. His family all referred to him as “Toby” and Uncle Toby was a favorite of nephews and nieces.

A Celebration of Life was held at 4:00 p.m. immediately following the visitation.