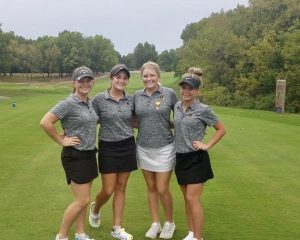 By Lenny Sementi
Senior golfer Lainey Banta and her young guns got it done this past Thursday at the Bethany Okaw Valley IHSA Regional. Banta led three freshman golfers into their first post-season in style as the Lady Warriors captured third place as a team finishing just two strokes out of second earning the right to advance to the Jacksonville Rout Sectional.

Banta backed up a Medalist outing at the Central Illinois Conference Tournament where she posted her lowest 18-hole score with her second lowest effort firing an even 100 on the difficult tree lined 6024-yard course. The big effort on the big stage earned head coach Doug Bauer’s number-one fourth place hardware in the Regional.

Makenna Fiscus posted a career best 18-hole effort as well firing a 108. The first year Warrior landed in the top ten and would have also qualified as an individual and would have been the fifth qualifier had the Warriors not advanced as a team. Teammates Marley Good and Ella Boyer rounded out the scoring. The two ninth graders were within two strokes of each other penciling in a 120 and 122 respectively securing the right to move onto Jacksonville.

The ladies in black and gold will travel to Jacksonville Country Club on Tuesday morning with hopes of another great outing. It will be one of the longest courses they have played on this year boasting 5927-yards from the red tees.

Eagle Creek was not as accommodating a few days earlier Tuscola’s boys season came to an end a few days earlier on Monday, October 7.  Okaw Valley again welcomed the IHSA to the hilly 6,599 -yard course from the men’s tees. Sophomore Jaden Gaines led the way for Bauer’s boy’s team carding a 110 finishing 10-shots off of advancement. Classmate Landon Banta was next in line shooting a 112 while Tyler Bialeschki and Braden Boyer both toured the course in 116-shots. Cory Dunn and Brody Good served as alternates for the Warriors.