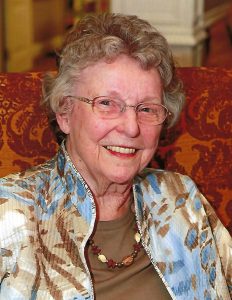 Dorothy Yallaly Boyd died Saturday, September 28, 2019 at 1:05 a.m. She was 91 years old. Dorothy was born October 30, 1927 to William and Clara Niermann in Prairie du Rocher, IL. As a child, she attended a one-room schoolhouse along the “bottoms” of the Mississippi River near Prairie du Rocher, IL. She often joked about having skipped a grade as she was the only one in her class that particular year. Her teacher told her she was “smart enough” to move up to the next grade level. Her formal education ended after 7 years of schooling.

Dorothy lost her mother at the age of 13. She worked for a short time in St. Louis during World War II but after her sister married, she returned home at the request of her father to cook and do household chores. She married William A. Yallaly (Bill) on October 8, 1949. For several years, Bill worked and farmed in southern Illinois during which time 3 children were born – Michael, Craig, and Patricia. In the fall of 1956, the family moved to Villa Grove, IL where Bill opened a Western Auto store on Main Street next to Weaver’s Restaurant. During this time, Martha and Janet were born. In 1963, Bill and Dorothy purchased Tohill’s Hardware & Furniture Store at 23 North Main. Eventually Bill and Dorothy moved the furniture portion of the business to the former bowling alley, establishing Yallaly’s Furniture Store (1977 – 1992).  Bill Yallaly died in 2004. Dorothy later married Thomas Boyd of St. Genevieve, MO. He died in 2011.

Dorothy worked alongside her husband in the hardware and furniture store for over 35 years. She cooked every holiday for her family even as it grew to a large number. Her home was the common place where the family always united. She enjoyed sewing, cooking, gardening, golfing, dancing and playing cards. Commitment to efficiency and a hard-driven work ethic were her hallmarks. Her entire life was a testament to the resolve of accomplishing what needed to be accomplished. Her undeterred Catholic faith brought her through many hardships and much joy. She was a member of Sacred Heart Catholic Church, Villa Grove, IL and later, St. Matthew Catholic Parish in Champaign, IL.

The family wishes to thank the staff and residents of Carriage Crossing Senior Living at Arcola, IL for their care, attention, and friendship to Dorothy and her family.