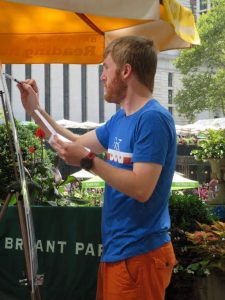 By Kendra Hennis
A journalist named Arthur Wynne from Liverpool published the first crossword in the Sunday newspaper, New York World 1913. However, they did not really come into popularity in America until the 1940’s. After the attack on Pearl Harbor, the New York Times began running crossword puzzles to give people something to do during blackout hours and to distract them from the war.

Chris Adams is a 2010 Graduate from Tuscola Community High School and he designs crossword puzzles. His puzzles have been featured in the Wall Street Journal, the LA Times, the New York Times, The Daily Iowan, FireBall, the American Values Club, Outside the Box, Cornell Alumni Magazine, the Minneapolis StarTribune, the Cronical of Higher Education, Universal Tribune, and the Orange County Register. He began by just casually solving puzzles in college by picking up the school newspaper on his way to class.

After graduating with his Master’s Degree in Mathematics, he went to Qatar for a year to teach. There, he began to regularly do crossword puzzles. He would also read blogs from the New York Times about the puzzles that they run. After delving in, Adams began to dive deeper to learn more and make connections that he needed to get started. When Adams got back to the United States, he attended a crossword tournament in Minnesota. This tournament allowed him to learn more about the construction, and he has been designing crossword puzzles ever since.

There are computer programs that help with the shape of the puzzle, but a lot of other aspects go into their design. He likes to make puzzles that have fun themes. And it is important to Adams that his clues stay topical and relevant. He tries to avoid using clues that people don’t know or things that are not interesting. There are some assumed rules to crossword puzzles, though Adams said, “the rules are always made to be broken for the right theme.” Most words are three letters or more, the design is usually symmetrical, and the goal is to be aesthetically pleasing. For Adams’ designs, the theme of the puzzle often dictates the clues in the puzzle. However, he finds inspiration in anything and everything.

Adams’ Grandma loves crosswords, and insists on them daily in pen. This love carried through his life, and now that he is doing what he loves, he likes to make omens to those in his family. He will occasionally throw in clues inspired by his family, like golf for his Grandpa or the Dodgers for his Grandma. One of his grid designs was inspired by a mug that he received as a gift with a blank grid, a place for him to start creating his puzzles.

Adams was recently subcontracted to create twenty puzzles for a book of Wait, Wait…Don’t Tell Me! Crosswords. The book does not yet have a release date. In his free time, he is finishing his Doctorate at the University of Iowa. Adams encourages us to do more crosswords, and it is okay if you need a little help. He said, “I’m perfectly fine with it (people going to the answers). Once I make it it’s your puzzle, solve it however you want. If you learn something, even if you had to look it up, great. If you look something up and it helps you finish it, that’s great. At the end of the day they’re meant to be solved.”