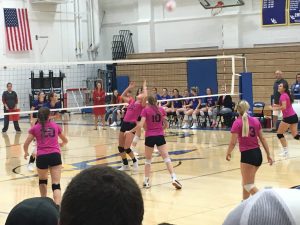 JFL
The Lightweights continued their strong late season play by blanking Tri County 30-0 on Saturday, October 5.
The Heavyweights ended their undefeated regular season by burying Tri County 45-0.  The Blue Devils scored on 6 of their 8 offensive plays in the first half to leave no doubt about the outcome.  Gunner Cline had 4 carries for 193 yards and 4 TD’s, Layne Rund rushed twice, with both resulting in 58-yard scores, and Braydon Dowler burst up the middle for a 10-yard td on his only carry of the game.  Emilio Garza, Gavin Gawthorp and Zach Wells each converted 1-point extra point attempts for the Blue Devils, who reversed roles in the second half, with the QB and skill position players taking positions along the line and allowing the big boys up front to carry the ball.  Defensively, VGH was led by AJ Jensen and Nic Wilson, who each made 8 tackles.  Rund had an interception and Cline forced a fumble which he recovered.  Big 99, Kyle Krause, had 5 tackles, including two for loss for the Blue Devils, who have scheduled an extra game next Saturday at Tolono.  The lightweights will kick off at 10 and the heavies will follow at 12.