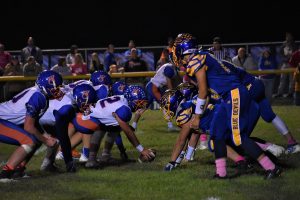 Blue Devils line up against Argenta-Oreana. 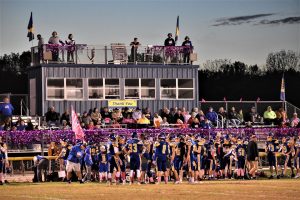 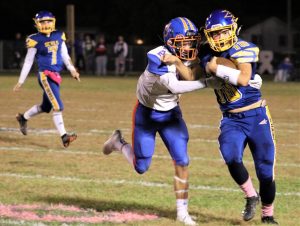 The Villa Grove Heritage Blue Devils demonstrated tangible proof that they’ve improved over the course of the season on Friday, October 4.  Unfortunately, Argenta-Oreana and their superb running back, Makail Stanley, had just a bit more left in the tank as they defeated the hosts 48-34.

The Bombers won the toss and elected to receive the opening kick and promptly marched 63 yards to the endzone.  The extra point was true, and with 9:34 left in the opening period, the score stood at 7-0.

A nice return from Ierik Sorenson gave the Blue Devils good field position to start their drive and relying largely on a punishing running game centered on QB Blake Smith (unofficially 17 carries for 69 yds and 2 TD’s) moved to the AO 7 yard line before Smith calmly rolled to his right and found Sorenson for the 7-yard touchdown strike.  The extra point attempt failed, and with 5:35 left in the first, the score stood at 7-6, Argenta-Oreana.

The AO offense then steadfastly moved down the field, with their drive culminating in a 20-yard QB keeper to the endzone.  Once again, their extra point was true, and with 2:27 left in the first quarter stood at 14-6.

This time, the VGH offense could find no traction, and the blue devils were forced to punt.  Again, the Bombers were able to reach the endzone, but this time the extra point attempt failed, and with 9:38 left in the half, the score stood at 20-6 in favor of AO.

This time, the Devils were able to dent the Bomber defense by going to the intermediate passing game with Smith (7-9 passing for 108 yards and 2 TD’s) finding Ezra Ely (2 catches for 33 yards) and Kehm Shirley (1 reception for 14 yards, 6 carries for 17 yards) before going to Sorenson (5 catches for 90 yards and two TD’s) for the 29-yard scoring strike the Devils then converted on the two-point conversion to set the score at 20-14 with 7:58 left in the half.

This time, AO wasted no time as Stanley went 64 yards to the end zone on their first play, and the extra point made it 27-14 Bombers at the 7:44 mark.

The VGH offense stalled on the ensuing drive, but Sorenson’s majestic 57-yard punt flipped the field and this time the Devil defense, led by Zayzen Price (13 tackles) stood strong and forced an AO punt.

Unfortunately, the Devils couldn’t stand prosperity, as Smith tossed an interception on the first play of the drive.  The Devils defense, led by Jack Benschneider, (6 tackles) Keaton Junglas (6 tackles, one for loss) and Clayton Knierim, (6 tackles) again stood strong, forcing another punt which rolled dead at the VGH 43 yard line.  Three straight Smith runs and a 22-yard completion to Ely were followed by 5 and 18 yard runs by Smith, with the last one good for the touchdown to set the score at 27-20 with :53 seconds left in the half.

The Blue Devils then took the second half kickoff right down the field and Smith capped the drive with a 20-yard, bobbing, weaving touchdown scamper down the right sideline.  Ely’s extra point attempt flew true, and with 9:29 remaining in the 3rd quarter, the game was tied at 27.

Carson Howard (5 tackles) and Logan Nohren (4 tackles, one for loss) then helped the VGH defense force yet another Bomber punt, which rolled dead at the Blue Devil 29.  Then, on the play which would ultimately play a huge role in determining the game’s outcome, Smith rolled to his left, only to have the ball dislodged on a play which would see him leave the contest.  AO recovered and would take just two plays to regain the lead at 34-27 with 7:33 left in the third.

The Blue Devils would add another score on a nice 29-yard scoring strike from Liam Barr to Sorenson with :43 seconds left in the third, but AO would tack on two more scores to set the final tally at 48-34.

Villa Grove Heritage will travel to Toledo for an important Lincoln Prairie conference tilt versus Cumberland on October 11.