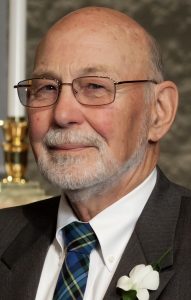 Norman “Gene” Weir, 88, of Eberhardt Village in Arthur, IL, formerly of rural Atwood, IL passed away at the place of his birth, Decatur Memorial Hospital in Decatur, IL on October 3, 2019, surrounded by his loving family.

Born January 12, 1931 to Dr. Edgar Wilkin and Blanche Vivian (Kamm) Weir, he spent an idyllic childhood in Atwood, learning farming and life lessons at the Kamm family farm and Weir family gatherings. As a freshman in high school he met the love of his life, Colleen Wildman, who remained faithful to him for more than 75 years. They graduated from Atwood High School in 1948 and married on August 20, 1950 at Lake Fork Church, Atwood. She survives along with five children Kathleen Weir of Bloomington, IL, Rebecca (Steve) Maier of Fayetteville, NC, Jennifer (Rick) Bauersfeld of Funks Grove, IL, Suzanna (Andy) Weir-Birkey of Bloomington, IL, and David (Colleen) Weir of Raymond, IL, 9 grandchildren, 2 great grandchildren, and a sweet, loyal sister Nancy (Bruce) Abraham of Monticello, IL, along with many nieces, nephews, and dear friends.

He graduated as a member of the Alpha Delta Phi fraternity from the University of Illinois with a BS in agriculture and later pursued a master’s degree in agronomy at the University of Missouri. He joined the United States Army as an engineer supply officer in 1953, served in the Korean Conflict and was honorably discharged as a 1 Lieutenant in March 1955. He was an active member of the James Reeder American Legion Post #770 in Atwood, serving in the color guard and as local commander. He farmed near Cerro Gordo, IL then Columbia, MO and became a production manager for Garst and Thomas Pioneer Seeds in Coon Rapids, Iowa. In later years, they relocated to Atwood. He worked in the hybrid seed corn business, as a rural mail carrier, and for Lincoln Trails Library System. At all locations of residence, he was involved in education and denominations of Christian faith serving on school boards, building committees, and in the choir. Though faithful to United Methodist traditions, he was most recently a member of Lake Fork United Church of Christ, Atwood. His life-giving generosity is reflected in the fact that he was one unit short of donating 20 gallons of blood.

Gene enjoyed building model airplanes from balsa wood and paper, model trains, aviation, nature, nurturing seedling trees, reading, history, music, travel, and vacationing in Gulf Shores, AL. He was very patriotic and loved his country. He laughed easily, gave generously, was a life-long learner, and a loving man who never met a stranger. More than anything he was a man of faith, devoted husband, loving father, and cherished his extended family ties.

Graveside services will be held at a later date. In lieu of flowers, memorials may be made to Lake Fork United Church of Christ, Atwood, IL, American Legion Post #770, Atwood, IL, or Central Illinois Down Syndrome Organization, Bloomington, IL.

Hilligoss Shrader Funeral Home, 66 East US Hwy 36, Atwood, Illinois is assisting with arrangements and cremation rites. Online condolences may be shared via www.hilligossshraderfh.com.