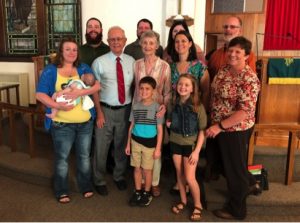 Howard and Alice Osborne were honored with the United Methodist Women’s Mission Award during church services on Sept. 22, 2019.

Howard W. and Alice L. Bradbury Osborne were both raised in Robinson. Howard in town and Alice on a small farm southeast of town. They were both members of Baptist churches, Howard in Robinson and Alice in Duncanville. Both graduated from Robinson High School in 1957 and started to different colleges, but later transferred to the University of Illinois.

They were married on Aug. 9, 1959 in the Baptist church at Duncanville. The first of three sons was born in July of the following year, the second 19 months later and the third in 1974.

During her teaching career at Villa Grove Alice taught second grade, first grade and fourth grade before returning to Eastern Illinois University in the early 70’s to earn a Master’s degree in Reading. She taught at the Lab School at EIU during this time as well. Shortly after returning to Villa Grove schools she became the Jr. High Reading teacher and the Gifted Education Director. Alice was also an active member of Alpha Delta Kappa. ADK is an international honorary organization for women educators that work together to better their schools, communities and the teaching profession worldwide.

After retirement both Howard and Alice remained active in education. Alice began teaching at the Reading Group in Urbana and tutored local students at their home. Howard went back to Villa Grove schools part-time to help Bob Sergent with Building Trades. Howard has worked construction with Bob for many summers while both taught at Villa Grove.

Howard and Alice were always teaching. The trips all over the country pulling a camper gave them an opportunity to teach history and geography. Howard also coached Little League baseball in the summer. Alice grew a garden, canned vegetables and kept flower beds. She managed to teach two of her sons some cooking skills. Both Howard and Alice are avid bridge players. They are now teaching their third generation of family bridge players. Many Saturday evenings and family gatherings over several decades have been spent playing bridge with family and friends.

Howard and Alice are both members of Douglas County retired teachers. Howard is currently the longest serving member of the Villa Grove Lions Club. The Lions Club provided the whole family with opportunities for fellowship and service to this community.  He also served this community as a member of the Villa Grove City Council. Howard and Alice enjoy staying physically active. Howard mostly by playing golf 2-3 times per week weather permitting. They both also enjoy reading, mostly for information, but also for pleasure.

Howard and Alice are also very active in their church. When they moved to Villa Grove, they attended the Baptist church and the Christian church before finding their church home at the Villa Grove United Methodist church. They officially joined VGUMC on April 21st 1968

Christian education is a very important aspect of their teaching. All three sons, six of their eight grandchildren and now two of their (soon-to-be five) great grandchildren have been or are being raised in the Villa Grove and Camargo United Methodist churches. Church attendance and participation is important to Howard and Alice and they lead by example. They have both served on about every committee on multiple occasions. Howard served as Lay Leader. He has taught the Triple M Sunday School class for…. well forever. Howard was one of the driving forces behind the Carpenter’s Helper program. He also helped with the FAST program when it was hosted at the church and he is an active member of Methodist Men. Howard and Alice were both involved in the Bethel Series bible study. They have always participated in projects around the church and they have both traveled on mission trips near and far to help others in need. Howard and Alice are both dedicated to sharing their knowledge about God, family and country with others. They have been and continue to be wonderful examples of faith filled Christian disciples.

The church that their son Rich attended in Monticello dedicated their Youth Center in Howard and Alice’s honor. The plaque with their picture is inscribed with the following:  This building is dedicated to Howard and Alice Osborne who spent their careers educating children. As school teachers they always wanted the best for their students and taught their own children that “you are blessed to be a blessing” from Genesis 12:2.