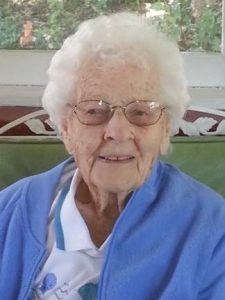 Mary was born in Tuscola, on Aug. 25, 1915, the eldest child of William and Anna Iles. She has related memories of riding the 5 miles out to their farm east of Tuscola with her father in a buggy drawn by their horse, Old Jim. At age 11, her father acquiesced to buy a new Studebaker car if the salesman agreed to teach her to drive. Favorite childhood memories were of camping out at the Illinois State Fair, while her father showed livestock. She graduated from Tuscola High School in 1933 and from the University of Illinois in 1937. As she told it, she didn’t really enjoy her years at Illinois until she was a senior. She had started off with Home Economics, which required her to take chemistry courses that she hated and in which she merely earned C’s. Finally, as a senior, she found her footing and made the Dean’s list, finishing with a double major in English and history. She described herself as a “confused bloomer” rather than a “late bloomer.” A talented singer, Mary won third place in the Illinois State high school music contest as a sophomore, and she was a member of the University of Illinois Glee Club.

Her first teaching position was in Mackinaw for two years. She then married Rex Carmack in 1939 who at the time was teaching at Camargo School, then a two-year high school. Meanwhile, Mary taught briefly at Rice School near Camargo, claiming “the students learned in spite of me.” During that time, Mary and her father-in-law would go to farm sales to acquire farm equipment while Rex taught. She related that “Rex would study the papers and tell us what to bid on. So, we bought our farm equipment while he was teaching.” During the WWII years, Mary and Rex used his teaching vouchers to purchase a farm in Indiana where they lived and farmed with horse-drawn equipment from 1941 to 1944. After the war, they returned to Tuscola to farm in partnership with Ted Carmack and Bill Iles. Rex and Mary initially rented a room upstairs in the house they would later purchase for $5,000 and live for the rest of their lives on Pembroke Street in Tuscola.

Mary taught 8th grade Language Arts at Tuscola for 19 years and is remembered fondly by her many students.  She was a life member of the Tuscola United Methodist Church, and admits that “we girls in the eighth grade Sunday School were so ornery that our teacher quit.”   As an adult, Mary reformed her ways to sing in the choir and taught Sunday School and Bible School. She was also a member of the Tuscola Woman’s Club in which she gained the distinction of being a 50-year “jewel” member.

Mary was preceded in death by her parents, her husband Rex of 50 years, and her siblings Betty (Iles) Carmack and William Iles.

Mary was a positive influence on all whose lives she touched (with the possible exception of her eighth grade Sunday School teacher), and her long life can be summarized as a life of generosity, kindness, faith, and grace. When asked for advice to a young person today, she said that her first piece of advice would be that a person with a positive attitude has a happier future than a person with a negative attitude and that persistence is a more important character trait than an entire resume of heredity.

The family is grateful to the wonderful caregivers at Tuscola Health Care Center, where Mary lived for the last few years of her life.

In memory of Mary, the family suggests donations to the Tuscola Public Library or the Tuscola Woman’s Club.

Funeral Services were Sunday, Sept. 29, 2019 at the Tuscola United Methodist Church, 901 North Prairie Street, Tuscola. Visitation was one hour prior to the services at the church. Interment was at Tuscola Township Cemetery.

Hilligoss Shrader Funeral Home, Tuscola, is entrusted with the arrangements. Online condolences may be shared via www.hilligossshraderfh.com