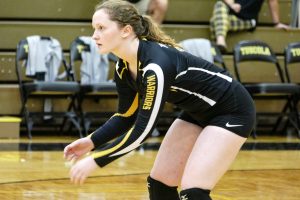 By Lenny Sementi
Tuscola’s volleyball team climbed back into The News-Gazette’s top ten this week after a few weeks outside looking in. Coach Lydia Miller’s team opened the season strong but came up short at a tough Casey tournament and fell from the ranking but, since the tourney, have run off four wins in their last five outings to claim the 10th spot in this week’s list.

The Lady Warriors notched a big Central Illinois Conference win on the road against Mowequa Central A&M this past Thursday in a thrilling three-game match 25-14, 24-26, 25-16 improving to 9-6 overall and 2-1 in the CIC. The first blemish in the league, and the only one in the five-game swing, came a few days earlier on Tuesday at home against perennial power house Shelbyville 20-25, 19-25.

The two-headed monster of Maddie Green and Jessie Martin at the setter position for coach Miller. The duo combined for 24 assists, sharing the wealth as six Lady Warriors notched at least one kill. They fed big hitter Karli Dean the most and she responded by pounding out a team high nine kills. Little sister Katie Dean was next in line with six kills followed by Amelia Bosch who donated five kills to the cause. The sophomore was big on defense finding her way to a pair of blocks.

Junior Kendyl Ring took her swings as well delivering three kills to the mix, but her biggest donation was in the back row where she found her way to 10 digs and recorded three aces. The elder Dean was number one at the service line posting 10 service points including a career high five aces.

Green also recorded 10 saves, but it was libero Kyra Moyer who led the way in the back row with a match and season high 14 digs. Moyer was big in game three saving a pair of down hill spikes that ended up being point possessions for Tuscola.

Bosch opened the first match of the week versus the Lady Rams with a kill as Tuscola jumped out to a 3-0 advantage, but it was short lived as Shelbyville posted a six-point run putting them in front for good. From there, the two teams traded points until the neared the 20-point mark where the Rams survived a pair of short Warrior runs to close out game one.

Early kills by the Dean sisters and a dink by Green put the Warriors in front by two 9-7. Shelbyville answered a three-point turn by the Warriors with a six-point run to move in front then used a 6-2 run to break open an 18-18 ball game.

Green was tops in the assist column for the black and gold with nine. Martin was next with five sets, while Katie Dean accounted for a team best seven kills. Bosch followed with four kills to her credit. The entire roster came through on defense as 12 players showed up on the save sheet with Ring at the top of the column delivering 10 digs. Moyer was next with eight digs then it was Grace Voyles with four digs, Karli Dean, Bosch and Keri Pierce checked in with two.

It’s a busy week for Miller’s crew as they open the week with road games at Heritage and Monticello Monday and Tuesday before they load back on the bus Thursday for a trip to Warrensburg.