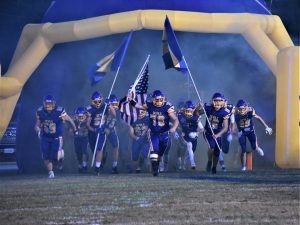 Submitted photo The Blue Devils take the field in style during the Friday, Sept. 27 Homecoming football game. The boys in blue took the 55-7 win over the Cerro Gordo Bement Broncos. 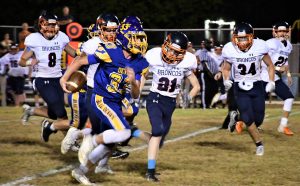 By Tony Hooker
The Villa Grove Heritage Football team didn’t allow an early special teams snafu to do any damage, scored on their first offensive play, and cruised to a 55-7 Homecoming victory over Cerro Gordo Bement on Friday, Sept. 27.

VGH won the toss and elected to receive, but the Broncos pooched the kick and the Bronco gunner was able to recover right in front of the Blue Devil bench and give them possession at the VGH 35.

The Devil defense, led by Zayzen Price (12 tackles, one for loss) allowed only four yards on four plays.

VGH took over on downs at the CGB 34, and wasted no time as Blake Smith (4-4 for 147 yds, three td’s) found homecoming king Ierik Sorenson for the 66-yard score on first down. The extra point was no good, and VGH led 6-0 with 9:54 left in the opening quarter.

After the kickoff sailed out of bounds, the Broncos were able to advance from their own 40-yard line to the VGH 46 before Price and Clayton Knierim threw Bronco QB Colin Warren for a 4-yard loss on third down to force a punt.

This time, the Blue Devils were able to gain no traction and were forced to punt it back to the Broncos, but the Devil defense, led by Christian Ziemnisky (five tackles, two for loss) and juniors Logan Nohren and Carson Howard, playing perhaps their best defensive games as a Blue Devil, forced what appeared to be another 3 and out. CGB, however, had other designs and tried a fake punt, which Nohren and Price quickly snuffed out.

On first down from their own 43, Ierik Sorenson (one catch for 6 yards and a td, one rush for 35 yards) took a reverse hand off and weaved his way down to the CGB 22. Ezra Ely (three carries for 49 yards and a td, one catch for 19 yards and a td) gained 8 on first down. A personal foul against the Broncos moved the ball to the 7, Kehm Shirley (seven carries for 41 yards, one td) moved it a yard to the 6 before an errant snap resulted in Smith being thrown for a 13-yard loss. Smith then misfired on third down before calmly finding Ely for the 19-yard touchdown and then cruise in for the two-point conversion to set the score at 14-0 with 56 seconds left in the first quarter.

Again the VGH defense held strong, resulting in a fourth down stop to give the Blue Devils possession at the CGB 42. A quick strike from Ely on a sweep gained 25 yards to open the second quarter, and Shirley took it in from there. The extra point failed, and with 8:37 left in the half, VG led 20-0.

The Broncos once again couldn’t dent the VGH defense and were forced to punt. A fine 28-yard return from Sorenson set them up once again in great field position at the CGB 33, and Smith wasted no time, throwing deep for Howard, who posted up the defender and hauled in the scoring grab. Howard then found Nohren for the two-point conversion to set the score at 28-0 with 7:10 left in the half.

Three plays later, the Broncos, in desperation mode, tried a roll out pass on fourth down that Nohren was having none of, and his 8-yard sack of the QB gave VGH prime field position again at the Bronco 35. After Shirley gained 19 on first down, Ely took a sweep and wound his way to pay dirt from the 16. The extra point attempt was no good, and the score stood at 34-0 with 4:49 left in the half.

On the ensuing kickoff, Matt Rutledge alertly pounced on the pigskin at midfield, and after a huge 29-yard completion from Smith to Ely, the QB called his own number and nimbly sprinted into the end zone.

This time, Ely’s extra point kick was true, and with 1:41 remaining in the first half, the lead stood at 41-0, thus insuring a running clock in the second half.

The second half featured the VGH JV’s and saw Luke Zimmerman score from a yard out on the team’s first offensive possession to make the score 48-0. The Broncos would then return the kickoff 81 yards for the score to make it 48-7 before Elijah Kiesel’s 62-yard scamper down the sidelines would set up Zimmerman for a 9-yard score to set the final at 55-7. VGH returns to action with an important Lincoln Prairie Conference contest at home versus Argenta-Oreana on Oct. 4. There will also be a ceremony re-dedicating Russ Ghere field at half time.