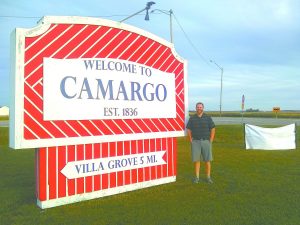 Photo: Tony Hooker
Camargo Village President Bart Dann stands near the new welcome sign to his community. This week, Dann talks about Woolly Festival, community projects, and what is on the horizon for his village.

By Tony Hooker
Bart Dann didn’t run for Village President of Camargo for the fame and glory.

Quite the contrary. He’s quick to give all credit both to his village employees and to the Camargo village board. I recently caught up with the VGHS graduate to talk to him about what Camargo has accomplished since he’s been in office, and about what he hopes to accomplish in the future. Naturally, we also talked about the Wooley Worm Festival, which will take place this weekend.

How long have you served as Village President?

A little over two and a half years.

What compelled you to get involved in politics?

It’s something I’ve always wanted to do. I always wanted to be the mayor of the town I grew up in. I was wanting to have an opportunity to give back to the community. When I had a chance to run, I was hoping to do a great job with it.

What’s been the most important thing you’ve accomplished so far?

First of all, I hate to use the word “I.” It’s we. I have a great board. I have a great support staff with Salisa (his wife) and Shirley (Badman). Doug, Rick and Kyle are amazing people, as well. I would have to say the park is our greatest accomplishment, so far. Nancy Simpson and I, along with 4-H, bought a portable fence to bring back Little League baseball to Camargo. They paid for half, and I paid for half out of my own pocket. We’ve also gotten some new playground equipment. We don’t have a ton of things here in Camargo, but our park is one of the top-notch ones.

On a personal note, what is your job, other than being Village President?

I’m a route salesman for Aramark. Aramark supplies uniforms and rugs to businesses.

Let’s talk about this weekend. How involved in the Wooley Worm Festival are you?

I take care of all the entertainment. Salisa and Pam Sigler, Jeane Breiland and Ashley Kielhorn take care of the rest of the festival. I was in charge of making arrangements for the bands and the food and that sort of stuff. They’re really the brains behind the operation.

<Bart> Honestly, we’re working on something every day to try to make sure everything’s lined up. From the day it stops, you’re starting to work on it the next day. It’s a lot of hours. I’d say at least 15-20 hours a week.

What sort of attendance are you expecting?

I’m hoping for at least 500. Five hundred to 1,000 would be a good day. Last year, we had a wonderful turnout until it rained, around 2 o’clock. We’re hoping that people will trickle in after the JFL game. This year in the beer tent, we have Garrett and the Geezers on Saturday night, and they always draw a good crowd. Kaz amusements is bringing bumper cars this year, plus their usual inflatables. We have the band “Me and Him” on Friday night, which was actually donated by Jack Thompson. He paid for the band. We’ll have somewhere around 20 vendors. John Davis is sponsoring “Family Feud” this year. Right now, we have the Camargo Methodist Church vs the Victory Church for one of the games. We have the VGH football team lined up for a second game, and we’re trying to line up an opponent for them. We have the Glow Cart Parade at 7:30. That’s always been a good turnout. The first year, we had six and last year we had 15. You don’t have to have a sticker for here in town. Decorate it and come out. We have a good parade route. You can have an ATV, a golf cart.

<Bart> We have so much going on that day. The FFA will be there selling hamburgers and pork burgers. Charleston concessions will be there selling food. We have the Kiddie Tractor Pulls. Fred and Doris Retter are the Grand Marshals. Pastor Duane will say the opening prayer. The Caitlin’s Challenge 5k will start things off. The 5k is that morning, and you can register, right by the Victory Church.

How do you see this growing in the future?

We really hope so. Last year was really hard to judge, because it was packed until the rain hit and then everyone dissipated. Whether we have a great turnout, or just so so, we’re going to keep doing it and keep growing it, because you can’t just quit a festival after the second year. You just have to get the word out and people will start showing up.

Are you still going to have the Wooley Worm races?

Of course, they’ll still be here!

They’re not surviving, but the ones we’ve found are black, and that means a bad winter!

Do racers bring their own worms?

Racers bring their own. Sometimes we have a few on hand for kids who didn’t collect one of their own.

What else is going on?

We’ll have a Rib smoke off and a bake off. We’re going to have a magician, walking around doing tricks. We’ll have kiddie and adult tractor pulls. There will be art in the park, for the kids. And from 7 a.m. until 9, the Camargo Methodist Church will be serving breakfast in the community building. We have a talent show scheduled for 4 p.m. Friday night, we’ll have our little mister and little missus pageant. Contestants will need to pre-register for that. They’re already signed up. Ford of Tuscola graciously donated their tent to us to use, so we’ll have an actual beer tent this year. A fundraiser we’re doing this year is “adopt a scarecrow.” For $25, you get a skeleton, and you can dress it and decorate it any way you want, as long as it’s family friendly. We’ll have a stage this year. We loved Villa Grove’s new stage, so we took theirs and made a few adjustments to it.

What have you learned in your first two years as Village President?

As a mayor or village president, you’re only as good as your board and your employees. Rick, Doug and Kyle make my job easy. They take care of a lot of stuff. This board is great. Shirley’s good with numbers and Salisa does a lot of the organizing. I have a great board.

Are you both VGHS grads?

Yes, I graduated in 1998 and she graduated in 1996. I coached Little League and junior high baseball one year. I love this whole community.  It’s a great place to raise kids.

We’re working on bringing new businesses to town. We’re going to be getting a new Verizon tower.  We’ve gotten a new swing in memory of Christine Killion. The playground is in memory of Caitlin Connor, and recently, the Dyke family donated a bench to the park. 4-H does a lot of stuff around here. We have to thank Tim Wegeng for repainting the sign. I want to thank the Chamber of Commerce for donating the sign to us. We’re doing a lot of cool things, and we’ll keep trying to do so.