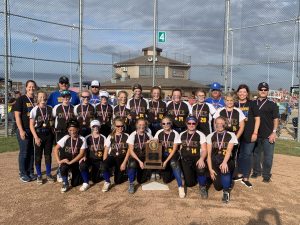 By Tony Hooker
The Villa Grove junior high softball team’s quest for state hardware ended in a fourth-place finish at the IESA state tournament in Normal on Saturday, Sept. 28.  Here’s a recap of the week’s games.

The Blue Devils didn’t let a 48-hour rain delay slow them down as they destroyed Lexington 17-4 at the Leroy Sectional in a game that began on Saturday, Sept. 21 and ended on Monday, Sept. 23. Kaitlyn Drew fanned 11 while giving up four runs to earn the win. Kayln Cordes led the way at the dish, going 4-4 with 3 RBI’s and two runs scored. Drew helped her cause offensively as well, going 2-2 with a pair of doubles and scoring three times, and Alison Pangburn was up to her usual tricks, reaching base three times with a double and three runs scored. Alex Brown also dented the dish three times, and Logan Lillard scored twice as the entire Blue Devil lineup got into the act to advance to the IESA state finals.

The Blue Devils defeated Serena 2-0 behind a dominant 15-strikeout performance from Kaitlyn Drew. Drew gave up only three hits in the shutout. Drew and Alison Pangburn scored the only runs VG would need, and Alex Brown had the lone RBI.

With nominal turnaround time, the Blue Devils fell to Pleasant Hill 8-2 in the third-place game. Kaitlyn Drew doubled and scored, Alison Pangburn added the other VG tally, and Chloe Reardon knocked in both runs, and Logan Lillard tallied two hits for VG, who once again totaled eight hits but couldn’t string them together. Alex Brown took the loss for VGJH, who saw their season end with a fine 14-3 record.

Lady Warriors basketball carry on in the season to defeat St. Teresa