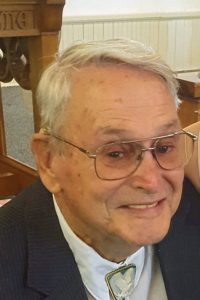 Bennie was a long time farmer in the Mattoon, Humboldt and Westfield areas for 61 years. He was employed by Charleston Park District, Coles Moultrie as a meter reader as well as delivered papers for the Journal Gazette. Bennie was the director of Coles County Farm Bureau, Dorans Elevator Board and Cooks Mills Fire Department; he was a proud member of Lincolnland Carriage Club, Motorcycle Club in Arcola, Camper’s Club, 4-H Leader and a past President of the Rainbow Riding Club. Bennie had a passion for cars, motorcycles and camping with his family and friends. He held his family, especially his grandchildren, very close to his heart.

He is survived by his two children, S. Joan Cobb of Mattoon and B. Gene Cox (Wendy) of Mattoon; four grandchildren, Chet Cobb (Megan) of Champaign, Cassie King (Wes Cooley) of Mattoon, Dalton Cox (Bridgett Nickles), and Jesse Cox (Corine) all of Cooks Mills; three great grandchildren Cameryn Cobb of Champaign, Wyatt and Madeline Ann Cox both of Cooks Mills, and several nieces, nephews and their families. He was preceded in death by his parents, wife, sisters Katherine Lawyer and Betty Osborn; son in law Roger Cobb and brother in law Gerald Osborn.

Condolences may be left for Bennie’s family at www.adamsfuneralchapel.com.