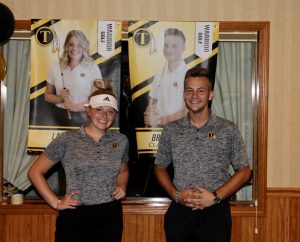 By Lenny Sementi
Head golf coach Doug Bauer’s squads celebrated senior night this past Thursday at Ironhorse Golf Club. The fall season is flying by and heading toward the post season and Bauer’s group tuned up for a stretch run hosting two state ranked boys teams and a very good girls group in a quadrangular meet consisting or the Warriors, Sullivan, Tri Valley and St. Teresa.

Senior and fourth year golfer Lainey Banta led the way for the coaches girls by firing a team best 51 finishing in sixth overall, shooting par on a pair of holes. Next up in the two hole for Tuscola was freshman Makenna Fiscus. The first year golfer shot a 56, while her classmate Marley Good finished one spot back with a 57. Another from the class of ’23, Ella Boyer, rounded on the scoring as the Warriors fell two shots short of second place Tri Valley taking third place as a team.

Boys ended their day in third, as well, finishing behind state-ranked Sullivan and Tri Valley, both of which had a pair of golfers in the 30s. Jayden Gaines was tops for the black and gold paring three holes en-route to a 48. Tyler Bialeschki was one strong and one spot back following a pair of pars penciling in a 49. Senior Brody Good toured Ironhorse for the final time shooting a 53. Landon Banta carded a 53, as well, rounding out the scoring for Tuscola. Brayden Boyer was just two points behind them serving as the alternate.

The Warriors travel to Mowequa on Tuesday the 1st and will battle the unusual October heat wave at the Central Illinois Conference tournament. They then wrap up the regular season on the road at Norton Knolls in Oakland taking on the Tri-County Titans.