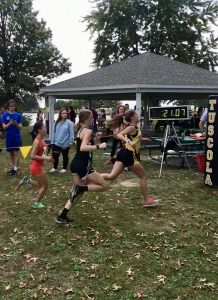 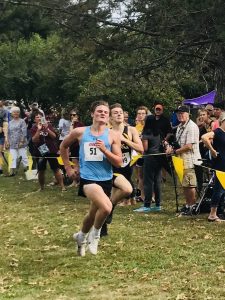 Tuscola cross-country coach Mike Rosenbaum issued a challenge to both his boys and girls team this past Saturday prior to the 42nd running of the Tuscola Classic at Wimple Park, and his squads answered the bell.

“I told them I wanted them to not focus as much on times, but to compete with certain people in the race,” stated the coach. “And a lot of them stepped up to that challenge. I was very pleased with how they competed and pushed ourselves, specifically at the end of the race, we had four kids in the top 75 on the boys side, and Brynn Tabeling earned herself a trophy with an 18th place finish individually.”

Mason Day and Logan Wallace backed up a one, two finish a few days earlier at Wimple leading the Warriors boys to the win a triangular meet with Villa Grove and Tri-County with a strong outing in the classic. Day ended his day just out side the top ten out of more than 200 runners with a 13th place finish, crossing the line in 17 minutes and 33 seconds. Wallace was a few spots back in 16th overall, entering the chute in 17:42 as the duo collected some individual hardware and led the Warriors to a 7th place finish as a team.

Next up was River Kanitz in 44th overall with a 18:42, followed by Riley Nolan who took 60th (19:18) and Nicolas Woods 71st (19:58). Zach Mattingly was one behind in 72nd as Tuscola placed five runners in the top 75. Tanner Campbell, Caleb Haste and Jacob Middleton served as alternates for the black in gold.

“The boys took a big step forward this week, on Tuesday we had six runners in the top nine, which put us in a good place heading to the classic,” stated Rosenbaum.

Tabeling was first in the triangular with a 21:43 and went 35 seconds faster on Saturday at the Classic taking 15th to secure a trophy. Faithlyn Daugherty was the number two for Tuscola taking 53rd with a time of 24:43, while Mackenzie Herschberger ended up one spot back in 54th (25:05). Next right behind in 55th was Hannah Hornaday in 25:09. Sage Stahler was the final scorer for the 10th place Lady Warriors taking 61st in 25:38. Kenzi Heckler and Hannah Lemay rounded the lake at Wimple as alternates.

“Some of the girls dealt with a little bit of adversity, but they performed well, I was pleased with their perseverance,” the coach commented. “And they were really strong winning the triangular earlier in the week. Almost every one of them improved on their times from Tuesday to Saturday.”

Tuscola will use a meet Tuesday at the U of I Arboretum in Champaign before gearing up for the legendary Spartan Road Race Classic in St. Joe on Saturday.