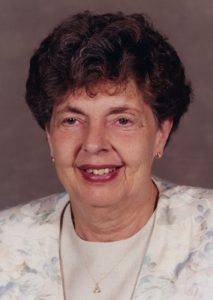 Ruth Marie Buck, 92, of Armstrong, passed away at Country Health Care, in Gifford.

Ruth graduated from Villa Grove High School in 1945 and later received her Registered Nurse training at Mercy Hospital, graduating in 1948. She worked for 19 years at Armstrong High School, as the school nurse until her retirement in 1984. Ruth was a member of St. Lawrence Catholic Church and the Altar and Rosary Society. She was a member of an informal quilting group in Penfield. She enjoyed crocheting, quilting, flower gardening, traveling and spending time with all her family and grandchildren. She lived an extraordinary life, influencing all she met, and showed all how this thing called life should be done.

Visitation was Wednesday, Sept. 4 at Blurton Funeral Home, in Potomac, with a rosary service. A Mass of Christian Burial was Thursday, Sept. 5, 2019, at St. Lawrence Catholic Church, in Penfield, with Father Michael Menner officiating. Burial followed in St. Lawrence Cemetery. Memorials may be made to St. Lawrence Catholic Church. The family has entrusted the Blurton Funeral Home to assist them in honoring Ruth’s life. Memories or condolences may be shared with the family on her everlasting memorial page at BlurtonFuneralHomes.com.