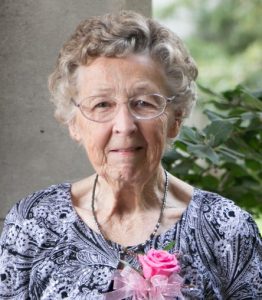 When she was a child, the family moved to Villa Grove where Nellie graduated from high school. She worked at the local drug store during high school. She was the Pancake Queen of Villa Grove in 1948 and won a train trip to Chicago. Nellie married Paul Reed on Feb. 20, 1949. Paul passed away on April 1, 2007. Nellie and Paul returned to Monticello to farm and raise their family. Nellie had a huge vegetable garden and canned and froze vegetables, raised chickens, sold eggs and had beautiful flower gardens. Nellie taught Sunday School at the Methodist Church. She was Co-Leader of the Happy Helper’s 4-H Club. The club presented a skit (a comedy) on How to Apply Make-up and won First Place at the Piatt County Fair and then First Place at the Illinois State Fair!

In retirement, Nellie enjoyed volunteering at the Piatt County Nursing Home mending clothing, delivering reading books to residents and painting nails in the Halcyon Unit. Nellie also enjoyed walking the bike path and around the Chimneys. She also enjoyed the Ladies Luncheons.

She had the greatest friends and neighbors who checked in on her. She was a wonderful Mother and friend. She made the best homemade noodles, loved the Fighting Illini and chocolate ice cream! The family wishes to thank the staff at Kirby Hospital for the wonderful care they gave to our Mother.

In lieu of other expressions of sympathy, memorial donations may be made to the Piatt County Nursing Home Activities Account for Residents or donor’s choice in memory of Nellie.

Graveside services will be held on Thursday, Sept. 26, 2019 at the Camargo Cemetery, Camargo, Illinois at 11 a.m.