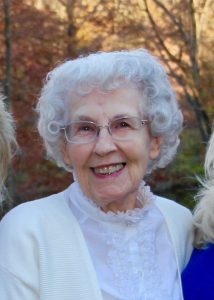 Funeral services were Monday, Sept. 23, 2019 at Morningside Church of Christ, 1212 South 34th St., Decatur. Visitation was held one hour prior to the services at the church.

Memorials may be made in Juanita’s name at Morningside Church of Christ or the American Heart Association.

Juanita was born on October 18, 1929 in Emporia, Kan., the daughter of Edith and Floyd Collinge. Juanita and Paul Fleener were married on Sept. 10, 1949 in Ottawa, Kan., and were blessed with 55 years of marriage before his passing in 2004.

Juanita and her husband, Paul, farmed in the Hammond area and owned and operated Fleener Country (Photography) Studio for more than 35 years. She was a faithful member of the Hammond Church of Christ and Morningside Church of Christ in later years. A volunteer for Faith in Action, she always put others first. With her ever present smile and beautiful singing voice she was a positive influence to everyone who knew her.

Juanita was preceded in death by her parents; two brothers: Kenneth Collinge and Clifford Collinge; and a sister: Audrey Singleton.

The family was blessed to celebrate an early 90th birthday party with Juanita over Labor Day.

Online condolences to the family may be shared via hilligossshraderfh.com.